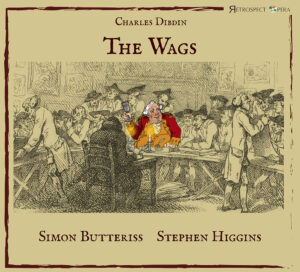 Famed for his ubiquitous and beautiful ballad Tom Bowling, Charles Dibdin had over 600 songs to his name and pioneered a theatrical form entirely of his own: the ‘Table Entertainment’, effectively the 18th century British precursor to cabaret. These tended to be one-man shows featuring character and patter songs and a kind of spoken plot surrounding them. The Wags premiered in 1787 and was Dibdin’s most popular foray into this new form of entertainment. The action takes place in a fictitious “Camp of Pleasure” populated by colourful characters. Most of the songs in the work are in a very straightforward strophic structure, occasionally with refrains, many of them highly comic, including one poking fun at Italian operatic stereotypes (The Irish Italian Song). The regularity of forms does become a little repetitive at times, but luckily there is plenty of humour in the lyrics to compensate for the slight lack of musical variety. There is also the amusing Virtue of Drunkenness, which concludes with the piano wandering disastrously off key before crashing to a close.

In the singing role is Simon Butteriss, renowned for his ability with G&S patter songs, who adeptly turns his hand to this repertoire. Particularly remarkable, in fact, is his array of accents and character voices, which are usually more evident in the spoken passages than the songs. His voice is more characterful than beautiful, much like Dibdin himself, according to historical record. A sense of authenticity is further added by Stephen Higgins, who plays an 1801 Broadwood, built just 11 years after the premiere of the work. Authentic as it may be, I must say the harsh and sometimes tinny quality of the instrument becomes somewhat grating to my ear over the course of the 70 minute runtime, though there is some fine invention here as well, such as the use of the instrument to chime the hour in The Watchman. It is through Butteriss’ characterisation that the recording is at its best however, and one is left wondering if there might be a strong case for performing The Wags as a live or video performance in addition to the CD. Thankfully, a video has been made at the behest of Dibdin expert David Chandler and produced by Maria Anthony, boasting a host of period drawings animated in time to the music. This is available on YouTube and I recommend anyone interested to familiarise themselves both with this CD as well as the video. Reservations aside, the performance makes a compelling case for Dibdin’s works, which often ring just as true today as when they lampooned the society of the 18th century. It is a diverting and amusing release with much to delight lovers of Light Music of any period!