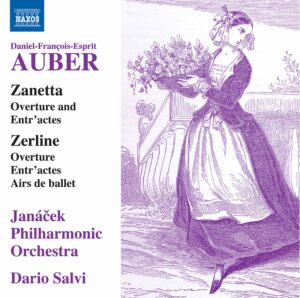 Far from being the pure exploration of overtures that the title suggests, Dario Salvi’s Auber series has consistently focussed on incidental music but in the case of the present release, the recording also encompasses ballet music. Zerline in particular must have been quite the spectacle in its day: a grand opera with over an hour of ballet included in the proceedings, a few highlights from which are included here.

As is often the case with Auber’s music, there is much here that is somewhat generic. Auber is a composer writing to order. Like much Light Music, this is a composer expected to produce what a client wishes, often on a tight deadline, so there are varying degrees of inspiration to be heard from one work to another. The works on this CD are perhaps a little more on the generic side, but the fact remains that they are of consistently high quality when it comes to orchestration and structure. They don’t necessarily always feature the most memorable melodies, but, in the case of the Zanetta overture that opens the CD, there is also no shortage of humour. The melody is regularly combined with a rhythmic invention, which playfully renders what the audience might think is going to be predictable music a rather more compelling listen. A worthy addition to any concert programme, and I’m happy to add, available for hire from the LMS library! Also included from Zanetta are a couple of Entr’actes as well as the more unusual Quadrille by Phillippe Musard, or “the French equivalent of Johann Strauss I” as the liner notes call him, Phillippe Musard. It is a five movement work on themes from the opera, which demonstrates how successfully Auber’s music transcended the trappings of “Grand Opera” to be as popular with the Light Music crowd of the day.

Zerline’s overture is admittedly a somewhat predictable affair in comparison to the Zanetta overture, but no less pleasing for it. It is in the ballet music, however, that Auber really shines. Drawing upon a diverse musical palette, the ballet suite here opens with a Styrian folk dance followed by a more exotic Chinese fantasy, an evocation of Greek mythology and even ballroom dancing. La Sentimentale et l’Enjouée is designed to evoke two distinct personalities in music and dance: the sentimental and the playful, as the title suggests. The extended Le Bal d’enfants runs to ten minutes of musical joy, opening serenely as if a pastiche of more formal dances, though a dainty mood runs throughout. It features an extremely well played (and rather tricky) violin solo, which is worth looking out for. The final music is full of musical exuberance and rounds off the disc with one of the most memorable melodic sections of Auber’s writing.

Dario Salvi, who has previously worked with the Czech Chamber Philharmonic and Moravian Philharmonic orchestras in this series, this time works with the Janáček Philharmonic Orchestra. The orchestra seems to have no trouble adapting to Auber’s unusual and transparent orchestral textures and the balance on the recording is exemplary. Salvi’s direction of the music is, as always, historically informed and faithful to the styles of the time, his love of the musical period always clear in his meticulous and idiomatic interpretations. He and Naxos are to be commended, as ever, for filling some of the gaps in discographies of music from the era of Grand Opera beyond Meyerbeer.