Rooted in Northampton: The Arnolds and the Haweses: Malcolm Arnold’s Family Tree 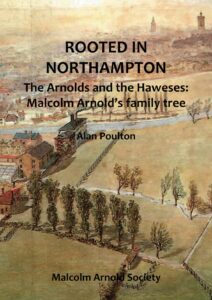 For those wanting to take a deep dive into musical highways and byways of British music, this book by Alan Poulton may be just what you’re looking for. With the Arnold centenary year nearly over, it is worth reminding ourselves that composers don’t just appear out of nowhere and Alan’s book is a supremely humanising effort, as well as an extremely useful historical resource. Malcolm Arnold’s mother, Annie Hawes, came from a musical family, her great-grandfather being the composer-conductor William Hawes, who was responsible for introducing Weber’s opera Der Freischütz to England, where it met with enormous success. Perhaps less has generally been known about the Arnold family, who had their roots in farm labour, before becoming major players in Northampton’s boot and shoe industry. Opening with a series of detailed family trees, first tracing the composer’s direct ancestors, before taking a much closer look at specifically the Arnold family, there is then an illustrated series of biographical essays on each member of the family, beginning with Robert Arnold (1700–1743). The riches really emerge, however, with the enormous wealth of researched materials that unfold in the book’s second chapter, tracing the development of the Arnold family through an abundance of newspaper cuttings between 1850 and 1950. Illustrations are plentiful along the way and the assemblage is effectively a curated exhibition of writings, without extraneous elaboration, allowing the reader to be guided carefully through this complex tapestry. Part 2 of the book then focuses on the Hawes family, not quite so replete with newspaper articles, but in incredibly detailed biographies of the family members, revealing the family’s musical tradition including “The Hawes Family Ensemble”, a string group, who performed together as a family at numerous events. William Christopher Hawes (Malcolm’s grandfather), who headed this ensemble, somehow found the time to be a professional level musician, whilst also working as a teacher and for the gas board! From Malcolm’s parents’ marriage, which opens this second part, we then move backwards in time to an earlier William Hawes (1785-1846), whose son (also William!) was a member of the Royal College of Surgeons, before being appointed Surgeon to the Royal Humane Society in 1853, only 3 years before his tragically premature death. The names being what they are, and a clear family tradition of male heirs being named after the fathers, this does all become somewhat perplexing at times, but thankfully we are directed frequently to family tree diagrams, which aid with the clarification wherever needed. There are even musical examples from the composer members of the family including Maria Merest (née Hawes), who was a singer and composer, and gave up a promising performance career when she married. We are to be most grateful to Alan Poulton and the Malcolm Arnold Society for guiding the reader so carefully through the occasionally bewildering, though always fascinating family tree of one of the UK’s greatest composers. DA