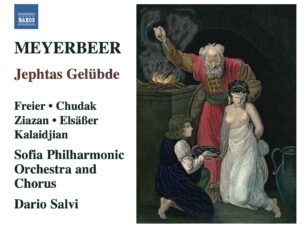 Another recording of historical significance from the seemingly endless treasures of lesser known grand operas is given here by a young and promising cast under the baton of Dario Salvi. At the time of writing, this album has only received a pitifully limited release, exclusively on Naxos Music and not on CD.

Jephtas Gelübde was Meyerbeer’s first opera and bears all of the hallmarks of a young composer striving toward a new form. It is a curious mixture of tropes commonly found in Singspiel works alongside oratorio-like writing for soloists and chorus. It also shows a kind of stepping-stone between Berlioz’ idée fixe style and Wagnerian Leitmotifs, making it a truly fascinating work that was long overdue a recording. It is, as my brief description might suggest, a little bit of a mixed bag, and a far cry from the more grandiose Meyerbeer we might be familiar with. The folk-inflected music is all surprisingly light for much of the time and the ensemble writing is of a very high quality.

Recorded on a punishingly tight schedule, (only 5 days from receiving the prepared parts to finishing the entire recording!), there are some very impressive performances on display here. The two baritones, Sönke Tams Freier and Laurence Kaladjian really are going places and they sing with conviction in their respective roles, capturing every nuance the drama demands. Andrea Chudak, regular Salvi collaborator, is welcome as ever in the role of Sulima and her solo arias are true highlights of the recording, though her duet with tenor Markus Elsäßer leaves much to be desired in terms of the close harmony intonation. Elsäßer, however, is nothing short of stunning in his first act aria (track 7 of the first act) ending in a sustained D above high C, which, had it been live would have brought the house down! Meanwhile, the enigmatically named soprano Ziazan (full name Ziazan Horrocks-Hopayian, sister of composer and performance artist Cevanne Horrocks-Hopayian) takes the role of Tirza. This performance will appeal to some more than others, with the German enunciation a little bit of an issue in places, but a unique tone that is extraordinarily refined and a supremely agile technique (imagine Kathleen Ferrier as a coloratura soprano and you’d be in the ballpark), which adds an unusual and hugely engaging character to the ensemble.

The ensemble as a whole (particularly in orchestral and chorus numbers) comes together remarkably well considering how little time there was to produce the recording, but it is a real shame that a recording of such historical significance should be denied a major platform release. Whatever my quibbles might be, they pale into insignificance with the sheer importance of the recording of this never-heard piece and I really hope we can soon see a version available both on CD and mainstream streaming platforms so the work doesn’t disappear all over again! DA