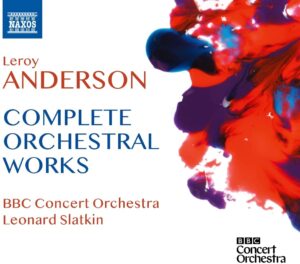 Naxos continues to revive its Light Music catalogue with this superlative box set of Leroy Anderson’s complete orchestral music. First released as 5 separate recordings, this is the first time they are brought together in a single box and it is well worth trying to get your hands on as a single edition. Anderson’s output spans Light Music miniatures, some longer suites and medleys, a piano concerto and even a musical for Broadway. As such a varied output suggests, it is a little bit of a mixed bag. The Piano Concerto, for instance, was withdrawn from circulation by the composer himself, but recorded here by permission of his estate. I cannot fault Slatkin, the BBC Concert Orchestra or soloist Jeffrey Biegel in their committed and thoroughly compelling rendition of the work, though the work itself doesn’t really seem to hang together cohesively. It is, however, a warm and enjoyable listen, if a slightly derivative affair. Ravel was once (I suspect apocryphally) claimed to have said to Gershwin, when he approached the older composer for lessons: “Why would I make you a second rate Schoenberg when you’re already a first rate Gershwin!”. Similarly, in the concerto, when first rate Anderson shimmers through, it is really quite wonderful, with hummable tunes aplenty, but they are enclosed in a second rate Rachmaninov shaped package! The middle Andante with a playful tango worked into the mix is particularly attractive however, and Biegel’s playing of the demanding score is first rate. The CD including this concerto also features some of Anderson’s best known works including The Typewriter and Blue Tango, mixing these well known and less well known in a wholly pleasing album. Highlights of lesser known pieces include the excitable China Doll and Hollywood-esque romantic First Day of Spring. Look out also for John Blackshaw’s performance of Bugler’s Holiday, which opens this CD at breakneck pace with brilliantly articulate playing!

More obscure titles appear on the second disc with Whistling Kettle and Horse and Buggy particular highlights, deserving of more concert outings alongside the better known miniatures. There are also superb renditions of Forgotten Dreams and Girl in Satin and the disc is rounded off with the Suite of Carols for string orchestra (a brass suite is found on disc 3 and woodwind on 5), a fine extended work, though not perhaps quite as successful as A Christmas Festival found on disc 4.

More Anderson favourites feature on disc 3, which boasts Plink, Plank, Plunk!, The Penny Whistle Song, Sandpaper Ballet, Serenata and the ubiquitous Sleigh Ride all included! Somewhat unimaginatively, the miniatures on the first 3 discs all appear in alphabetical order and I can’t help feeling a little more programming effort might have shaped them even more satisfyingly than they appear here.

Arrangements dominate disc 4 with both Irish and Scottish suites included, but we are also treated to vocal arrangements of three Anderson songs by Tony Award-winning lyricist Mitchell Parrish. Of these, Forgotten Dreams stands out, beautifully (and heartbreakingly) performed by Kim Criswell, the vocal line not found in the original work and, for my money, making rather more sense of the piece with the lyric than it does as a purely orchestral work. Baritone William Dazeley (always a welcome presence, in my opinion!) joins proceedings with a highly effective duet version of Belle of the Ball, while Criswell also sings Blue Tango as a solo number, making a compelling case for these pieces as almost musical theatre fayre!

The final disc picks up this very theme, with a suite from Anderson’s notorious failure of a Broadway musical Goldilocks (which was a breakout performance for Elaine Stritch). The failure of the show is a great shame in many ways, as it did earn two Tony Awards and considerable critical acclaim, though some felt the story (a parody of silent movies making ‘quickie’ pictures that end up going vastly over budget) was somewhat weak. The score, however, as shown here (and on an original cast album) is absolutely brilliant and begs the question of what a skilled dramaturg might be able to do with some reworking of the script.

With no shortage of Christmas-themed music in this box set, I’m sure you’ll find this a more than ample stocking stuffer for a Light Music-loving friend, so don’t hesitate to grab a copy if you haven’t already! DA