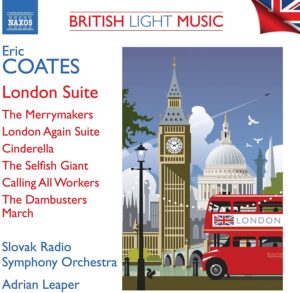 You can’t have a celebration of British Light Music on CD and not include Eric Coates! This continues Naxos’ re-issuings of classic British Light Music on CD (fingers crossed they’ll get to Ernest Tomlinson in the not-too-distant-future!). For those who haven’t heard the album, the ever-reliable curtain raiser The Merrymakers overture is the entry point for this little box of delights, which boasts some of Coates’ best known works alongside some surprising additions, which go some way to revealing Coates as a composer of considerable sophistication as well as a master tunesmith. Two much longer works included are Cinderella and The Selfish Giant, two “phantasies” inspired by hearing Mrs. Coates read bedtime stories to their son. Cinderella, in particular was (according to the liner notes) something of a sensation at the time, as it was still relatively uncommon in British music to include so many jazz influences. We also have two famous suites London Suite and London Again Suite and the disc is rounded off by the ubiquitous (but no less welcome for it) Calling All Workers and Dam Busters March. Most of Coates’ output was recorded by the composer himself and there is also a series of recent releases of his orchestral music by Rumon Gamba and John Wilson. This recording from Adrian Leaper and the Slovak Radio Symphony orchestra was made somewhat earlier than the other recordings and it would be fair to say that it isn’t the finest on offer, with some particularly lacklustre moments in the London Suite (Knightsbridge really doesn’t pack the punch it sometimes can at its climax), but the programming of the CD is very satisfying and it will, I’m sure, continue to provide a superb introduction to the work of this multi-faceted composer for some time to come. The two Phantasies come off particularly well with spirited and sophisticated performances, capturing both the unpretentious heart-on-sleeve spirit of Coates at his very best, as well as the underlying subtleties and expert orchestration. Acquire this CD ultimately to be swept away on a tide of good humour, hummable tunes and seemingly infinite charm as only Coates can achieve! DA