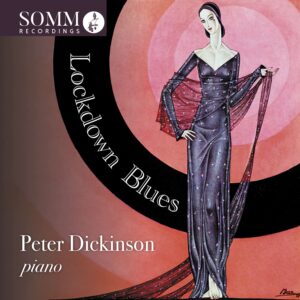 Another attractive release from this ever-enterprising label. Probably the main interest for our readers will be a tad under a the third of the disc devoted to the first recording of Edward Kennedy ‘Duke’ Ellington’s ‘Twelve Melodies’.  These popular songs – including It Don’t Mean a Thing (If it Ain’t Got That Swing), Sophisticated Lady, Solitude, Mood Indigo and In a Sentimental Mood – have been arranged by the pianist using the original sheet music.  So, they are quite different from the classic jazz versions.

Another recognisable work will be the American Edward MacDowell’s To a Wild Rose.  French composer Erik Satie’s Trois Gymnopédies, especially No.1, will be familiar to some, with his Trois Gnossiennes less so.

Also, possibly not so well-known are two pieces by George Gershwin in Three-Quarter Blues (Irish Waltz), which in the 1980’s was used as the signature tune for ‘After Henry’ with Prunella Scales on both BBC Radio 4 and then Thames Television, and Who Cares? from the musical ‘Of Thee I Sing’.

There are 31 tracks in all and include Peter Dickinson’s own compositions of the Bach-inspired album title tune, Freda’s Blues and Blue Rose, which Humphrey Burton in the excellent booklet’s introduction describes as a  “bluesification” of the MacDowell piece.

Particularly catchy is Francis Poulenc’s Pastourelle.  Not surprising that a 1932 recording of this by Vladimir Horowitz had been a great sales success.  Other works are by Constant Lambert, Samuel Barber, Lennox Berkeley, Eugene Goossens and John Cage, whose In a Landscape at 7’38” is the disc’s longest single item.

Peter Dickinson is described, rather charmingly in the booklet, as “a British composer of the senior generation”.  He is an Emeritus Professor of two universities, has given many BBC broadcasts and also authored a number of books about composers.  Value is added here by his programme notes.

Credit, too, for the choice of an adaptation from a 1928 Art Deco advert for a New York fashion house as the booklet’s front cover.

The effects of the pandemic have led to a plethora of solo piano albums and this, with the Ellington and its relaxing selection, rates highly among them.