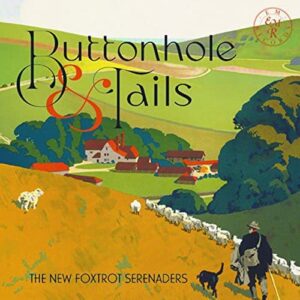 This new release from EM Records (an offshoot of the English Music Festival, or EMF) provides a real insight into a period of song-writing in the British Isles, which is in danger of quite serious neglect. With a focus on songs from the 1910s to the 40s, Buttonhole & Tails recounts some of the best known and best loved songs, often from the years of the two World Wars, which are often viewed as somehow nostalgic, but not often enough, in my view, as high quality well-written songs in their own right. The English Music Festival, established by Em Marshall-Luck in 2006, champions music by English composers of all periods and styles, whether light or heavy. EM records, similarly, has run for a very long time with the same aims. In this conversation with Em Marshall-Luck I asked about the production of this CD, but start here with how the record label first came about.

EM Records was born of the success of the English Music Festival (EMF). The Festival had been established for around four years and was unearthing some real gems; interest was high and audiences were good; and several occurrences then com- bined to spur me to set up a recording label. The first prompt was feedback from audiences at the Festival, saying how very much they had enjoyed hearing the newly-discovered pieces, but that they’d love to have the opportunity to listen to the works again on disc; at the same time I visited Wyastone Estate, the home of Nimbus Records, and struck up a friendship with the Business Manager. He explained to me how to set up a record label and assured me that the process would be relatively easy and simple with Wyastone’s help and guidance (Wyastone was involved as our manufacturer for the first few years of EM Records). My now-husband, the violinist Rupert Marshall-Luck, also played a major role in encouraging and persuading me to take a plunge he knew I wanted to take! The next impetus came when I realised a dream and staged a performance of Gustav Holst’s The Coming of Christ at the EMF – a wonderful work that had been completely overlooked for decades. It hadn’t been recorded and I was determined to rectify that.

The aim of EM Records ties in fully with that of the Festival: to commit to disc any pieces we come across that are deserving of being heard, with an especial focus on works that have been neglected, forgotten or overlooked. We make an effort to discov- er and unearth such pieces and to bring them to as wide an audience as possible by performing them, recording them (and, wherever possible, publishing the works and making them available to musicians and artists, thus facilitating further perfor- mances). We aim to include at least one world premiere recording on every disc we release. 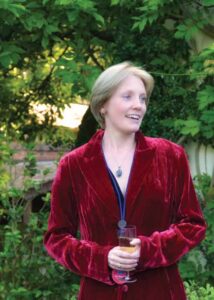 What role do you feel Light Music plays in the English Music Festival?

Good music is good music, whether it be light or serious! As a genre (admittedly one difficult to define!), Light Music plays an important role in the EMF and EM Records. I have always felt the need to strike a healthy balance in my programming between very intense and serious music and lighter music, and I aim to devote at least a concert or two in each main Festival specifically to Light Music, as well as featuring composers of Light Music in the main programmes. A number of discs on EM Records are likewise devoted to Light Music (such as Dicky Bird Hop, and our recording of the complete piano music by Roger Quilter).

The New CD from the New Foxtrot Serenaders consists largely of songs from the First World War, interwar period and Sec- ond World War. Was there a particular impetus behind your wish to celebrate the music of this period?

This is a period I personally have been very interested in for most of my life (to the extent that as a teenager I memorised all the differentiating features of Spitfire marks!); and from the very first time I heard music of this kind (Who Do You Think You Are Kidding, Mr Hitler, in my all-time favourite programme, Dad’s Army), I fell in love with the musical style. I think it’s ex- tremely important from an historical point of view, too, for reasons of education and also of acknowledgement by this society of the sacrifices that so many made for us. I wanted to remind listeners of both these wonderful tunes, written by important and admirable characters such as Sir Noel Coward and Ivor Novello, and of this important time in our history. I sometimes wor- ry that such music is overlooked or looked down upon, especially by younger generations, as being old-fashioned and irrele- vant to modern society, and would like to do all I can to keep it alive.

What musical qualities in the pieces included on the disc do you find you’re particularly drawn to and what would you say some of the notable features are that people should look out for?

I am drawn almost as much to the words as to the music, and feel that the two together – as in the best of Art Songs – combine to create an even higher form. The programme expresses such a wide range of emotions, from the sincere and poignant senti- ments of Keep the Home Fires Burning and We’ll Meet Again, through the cynical irony of Dance, Little Lady and Could you please oblige us with a Bren Gun? to the buzzy Leaning on a Lamp-post. This isn’t just a trip down Memory Lane, nor just a col- lection of jolly good tunes – although it is indeed possible to listen on this level if one wishes – but one can also delve deeper into both words and music.

Personally, I love the passion and sentiment, yet so often hidden behind stoicism and a down-to-earth practicality; the nostal- gia and yearning qualities; the irony, word-play and witticisms; and the infectious toe-tapping-inducement of the livelier, jollier numbers.

Look out for musical quotations: in Noel Coward’s Dance, Little Lady, a plagiarism (admitted by Coward but pronounced sub- conscious!) of a song from Lisa Lehmann’s In a Persian Garden, a quotation from Gershwin’s Rhapsody in Blue at the end of the song, and hints of the Charleston between the choruses. Likewise, in Ivor Novello’s Keep the Home Fires Burning we find a quotation from Tchaikovsky’s Symphony no.4, while the similarity of the tune to Holst’s In the Bleak Midwinter is unmissable! 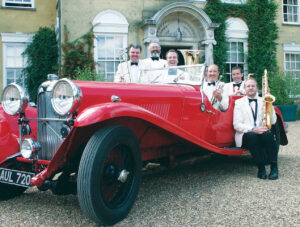 A CD like this is a kind of showcase for good arranging and the pieces here are all arranged by the late John Ashworth. Can you say a few words about him and his work with the band?

John Ashworth was a self-taught pianist and arranger; he had not just an instinctive feel for music, but also tremendously wide knowledge of not just dance-band music, but the wider classical music spectrum. He co-founded the New Foxtrot Serenaders, along with band-leader Graham Wright, and was their music director, pianist and arranger, until his death in 2019. This disc is dedicated to his memory.

You now have a very long standing relationship between yourselves at EMF and the ensemble – how did this first begin and have you found audience responses have been warm to the light programmes as well as the more mainstream repertoire?

The New Foxtrot Serenaders approached me for a concert in the 2013 Festival; once I had read their letter of application and discovered the genre of music they represented I was delighted and booked them at once! Although we’d had some folk music concerts, we’d never had dance-band music and I was overjoyed to add it to the EMF’s repertoire. That same year I had a large number of interns helping out at the Festival; none of these youngsters had ever encountered this sort of music before and I will never forget turning round in my pew in the concert to gauge their reactions and seeing a row of utterly astonished faces – this was completely new, bewildering, and they hadn’t a clue how to react. I turned around again a few numbers later and was rewarded with the sight of that astonishment now turned to grins of joy. We have had the NFS back almost every year since 2013; audiences have, as a general rule, welcomed this inclusion, and some people attend for the Light Music concerts only. I think that our audiences enjoy being able to let their hair down at the end of the day after some serious listening, and the light- er element has always gone down very well and attracted as much positive feedback as the more serious concerts.

What are the future plans for the festival and how can readers help support you?

The Festival is ever-expanding! In recent years it has developed from only holding one main event a year to having a regular Autumn Festival and a Christmas concert series as well. Two years ago we took the Festival to South Africa, where it was wildly

successful, and this summer we also held an extremely well-attended event in Truro Cathedral. So plans are to continue expanding; holding more and more concerts, Festival and events wherever we can! Our next Festival will be an Autumn Festival in Hors- ham in November; Christmas concerts will see us in Corbridge in Northumbria for the first time; and we return to Dorchester-on -Thames in May 2022 for our main EMF. Further events are planned for Canterbury in December 2022, while travelling abroad, when allowed, will always also be on the wish-list.

Readers can support us by attending our concerts and purchasing our wonderful discs! Also, and perhaps more significantly, by joining our Friends Scheme, which is the backbone of the Festival and gives us the moral and financial support the EMF needs to survive and to flourish; or by signing up to our Gazette, Spirited, if interested in British composers and English music in general. We are also always on the look-out for new collaborations, new opportunities and new places to take the Festival. So if readers would like to help make a concert happen in their area; or would like to, for instance, sponsor a disc (we are planning a second one with the New Foxtrot Serenaders!), please let me know!