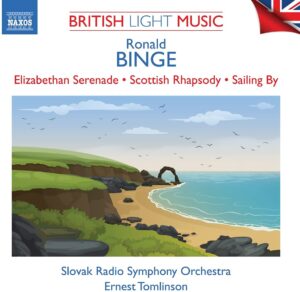 Continuing their re-issuings of the British Light Music and having presumably arrived at the letter B, this is a welcome addition to anyone’s Light Music collection. One of the most striking aspects of the present collection, for those yet unfamiliar with it, is the sheer variety of music on offer here. Ronald Binge, naturally, wrote largely to commissions and will almost certainly have looked upon some works as “just another background music piece”, but there is much that commands the listener’s undivided attention here. The largest work on offer is the Concerto for Alto Saxophone, which has no shortage of virtuosic displays from the soloist and, in a bit of contrast to the previously reissued Addinsell CD, is an extremely well wrought, structured and cohesive work, which begs more outings on the concert platform. There are, of course, a number of Binge’s staple pieces including Elizabethan Serenade, The Watermill and Sailing By (the theme to the Shipping Forecast), which closes the disc. In addition to this, there are some terrifically fun pieces, like the Mexican-inflected The Red Sombrero and the jaunty High Stepper, which was written for the TV show The Adventures of Aggie. The selection of pieces alone reveals Binge as a composer of great diversity, whose works really bear repeating.

The added bonus we can’t ignore with this disc is the presence of Ernest Tomlinson MBE, the previous president of the Light Music Society. Under his trusty baton, the Slovak Radio Symphony Orchestra brings every nuance of this music to vivid life in a manner which I doubt many other conductors could have mustered. The playing itself is that of orchestral players pushing themselves to the absolute peak of their performing prowess. Saxophone soloist Kenneth Edge (himself a student of John Harle) proves himself more than up to the task of Binge’s demanding writing and is known worldwide as a champion of lesser-known saxophone repertoire – and based on the present recording, rightly so. The re-issue is complete with informative and updated liner notes, so here’s hoping that the continued new releases of the rest of the British Light Music catalogue from Naxos serves to kindle some new interest in “our kind of music”! DA