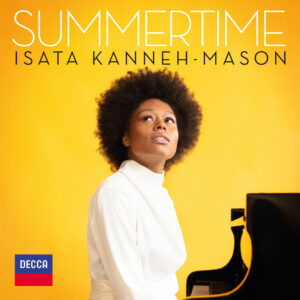 My last review was of a new release from one of the world’s best-loved queens of the keyboard and now we have this album of 20th century American music from a princess of the piano. Aged 25, Isata is the eldest daughter in the remarkable Kanneh-Mason musical family.  Interestingly, she completed her undergraduate studies at London’s Royal Academy of Music as an Elton John scholar.

She is already the recipient of the 2021 Leonard Bernstein Award, a 2020 Opus Klassik award for best young artist and, with her family, the 2021 best classical artist at the Global Awards for ‘Carnival of the Animals’ [Decca 4851156].  In 2019 she was signed by Decca Records and her acclaimed first CD, ‘Romance: The Piano Music of Clara Schumann’, immediately topped the UK Classical Chart on its release.

This second album, with its diverse track selection of classical and lighter items, should interest our reader.  The central work is Samuel Barber’s Piano Sonata (19’08), described as “of staggering variety … stealing glances towards Broadway and Hollywood”, that is well worth a hearing.  Also by Barber is the reflective Nocturne (Homage to John Field), one of the ten shorter pieces that form the larger part of the album.

There are four George Gershwin numbers: dazzling arrangements by the late, great pianist Earl Wild of the album’s title tune as an opener and I Got Rhythm, The Man I Love (arr. Percy Grainger) and Three Preludes, a characteristic classical-meets-jazz composition.  Then there is Amy Beach’s beautiful By the Still Waters, and Aaron Copland’s amusing The Cat and the Mouse

The album is completed by three of Samuel Coleridge-Taylor’s transcribed ’24 Negro Melodies’ – Deep River, The Bamboula and Sometimes I Feel Like a Motherless Child – and a premiere recording of Impromptu No.2, which was first published in London 110 years ago.  The composer (1875-1912) was English of mixed-race birth, who achieved great success on three tours of the United States in the early 1990s.  There is a connection between his father and Isata’s mother in that they were both born in Sierra Leone.

The playing of the Schimmel piano on this release, well recorded in Liverpool’s Philharmonic Hall, is altogether delightful and a life-enhancing listen.  I foresee that the wonderfully gifted Miss K-M could well be on her way to becoming celebrated among our very best pianists.