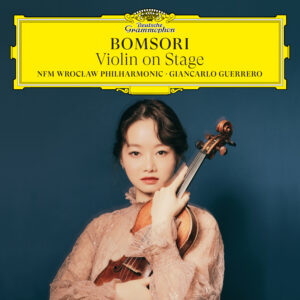 To those who have already come across her, Bomsori Kim is recognized as one of today’s most dynamic and exciting violinists. She won prizes at ten international violin competitions during the 2010s, and is a superstar in her homeland of South Korea. She was given her distinctive first name by her grandfather – it translates literally as ‘sound of spring’, although she was actually born in December 1989.

This is her second album on the famed yellow label and is an attractive selection of lightish classical works written for or inspired by ballet and opera. Familiar to readers will no doubt be The Nutcracker: Pas de Deux (Tchaikovsky), Carmen Fantasy (Waxman), Dance of the Blessed Spirits (Gluck), and Méditation from ‘Thaïs’ (Massenet).

Alongside these are three typically pleasant pieces by Saint-Saëns, and three by the Polish composer Henryk Wieniawski (1835-80), himself a great violin virtuoso and one-time soloist at the Tsar’s court in beautiful St Petersburg. His joyful Fantaisie brillante on themes from Gounod’s ‘Faust’ is the disc’s longest work at 17’23”. The ‘Faust’ theme and the fantasia genre were evidently both very popular with composers in the 19th century, and the five sections here end in a dazzling finale. Its first London performance in 1866 was reported to have been “applauded to the echo by a crowded and fashionable audience”.

The connection with Poland (dating from 2016 when in Poznan she won second prize, critics prize and nine additional special prizes in the Henryk Wieniawski Violin Competition) is maintained by the presence of her “co-stars”, the NFM Wroclaw Philharmonic under its six-time Grammy Award winning, Costa Rican Nicaraguan-born, US-based music director Giancarlo Guerrero, and the album was recorded at Wroclaw’s National Forum of Music, Main Hall – described by the soloist as having an ideal acoustic for instrumentalists – during December 2020.

Bomsori is quoted on the DG website: “I’m not a loud person, I usually don’t talk much in everyday life, but that’s why I love playing the violin (a 1774 Guadagnini) because I can speak and communicate with people in the music. I’ve loved singing and ballet since I was a small child and am always moved by hearing voices and watching dancers. I wanted to bring that special spirit of poetry and drama to listeners through my instrument, which can sing freely in these wonderful pieces”.

This is a lovely melodic album and I think we shall be hearing a lot more of Miss Kim in the future, with the hope that on the evidence of its release she keeps recording the lighter repertoire as well as the heavier classical works.

As an aside – I was interested to learn that she was inspired to follow a career as a violinist by her legendary fellow soloist and countrywoman Kyung Wha-Chung, with whom half-a-century ago I was twice privileged to spend time: at a record signing (in those days my employer W H Smith had a ‘Sounds’ Department in their shops), and a Decca recording session in the famous Kingsway Hall, also sadly no longer in existence.