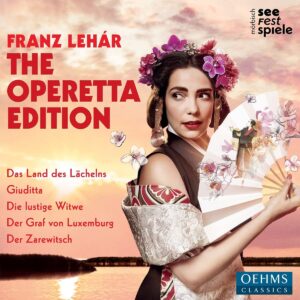 Various Casts, Mörbisch
Festival Orchestra & Choir
OEHMS Classics OC1902
The Seefestspiele Mörbisch is surely one of the operetta wonders of the world. With its vast outdoor stage which floats on water, and 3,000 seater auditorium, it is the biggest such festival anywhere in the world, receiving around 150,000 visitors a year. This marvelous box set brings together 5 of Lehár’s most popular operettas in live performances from the festival: Das Land des Lächelns, Giuditta, Die Lustive Witwe, Der Graf von Luxemburg and Der Zarewitsch. All of these recordings were taken in the first decade of the 2000s and are recorded live (though no audience sound is captured at all). None of the recordings feature any of the dialogue from the operettas and, as is increasingly and frustratingly the case, the set contains no libretto or English Language synopsis – a trend I find extremely irritating, even as a listener with a fair smattering of German.

On the plus side, the recordings themselves are really very good and acoustically sound consistently very good despite having been recorded outdoors. Occasionally, one can notice the singers contending with the outdoor acoustic space, with occasional overblown passages, but these are forgivable given the circumstances. The result can compromise a number, for instance the famous Vilja Lied in Lustige Witwe is sung very well by Margarita de Arrelano, but somewhat loudly because of the challenges presented to her. It by no means renders the performance flawed, but it does lack a certain softness of tone, which one sometimes desires in the song. This caveat aside, however, the performances are very convincing including Korean tenor Sangho Choi as Chinese Prince Sou-Chong and Elisabeth Flechl as his Viennese love interest in the doomed romance of Das Land des Lächelns, the former of whom excels in the “Tauberlied” in this opera. Usbek soprano Natalia Ushakova is a wonderfully alluring Giuditta, a singer with a depth of tone as well as superb higher range, Michael Suttner is a fine Rene in Graf von Luxemburg, if a little unfocussed in sound thanks, I think, to the outdoor performing environment, while Alexandra Reinprecht tugs at the heartstrings in the role of Sonja in Der Zarewitsch.

Lehár’s compositional versatility is also on show here – those who know Viennese operetta well will find far more than the “traditional” Viennese sound; the composer’s Hungarian background comes through of course in Witwe, but also his interest in Chinese (Land des Lächelns), Russian (Tsarewitsch) and African (Giuditta) musical cultures shining through in other works, all of which are sublimely orchestrated. So, quibbles aside, this is a real must-have for any operetta fan, especially those interested in less conventionally comic pieces, as much of the composer’s output is bittersweet (only 2 out of the 5 titles have happy endings!).