MAGICAL MEMORIES FOR TRUMPET AND ORGAN 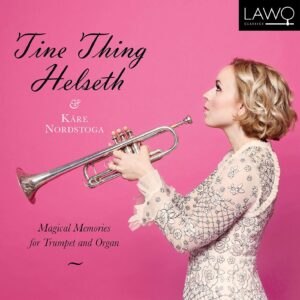 This is the third album by a trio of female trumpet players (Alison Balsom and Lucienne Renaudin Vary being the others I have had the pleasure of reviewing). Tine Thing Helseth (born 1987) is a Norwegian soloist, who has been the recipient of critical praise across six continents and numerous awards for her musical work.

She is joined throughout this release by the principal organist at Oslo Cathedral (Domkirke), Kåre Nordstoga. Remarkably, as in my last review, it opens with the Prélude from Charpentier’s Te Deum.

Among the other 24 tracks (none is longer than 4:43) are well-known works like the traditional Shenandoah, Mendelssohn’s Auf Flügen des Gesanges (On Wings of Song), Grieg’s Våren (The Last Spring), Purcell’s Trumpet Tune in C major, and – my favourite – Jeremiah Clarke’s Suite in D Major, the fourth movement of which is his “Trumpet Voluntary”.

Other Helseth’s personally chosen cherished “Magical Moments” include beautiful Norwegian bridal marches, more Grieg, an elegy, traditional and Baroque melodies (Jean-Joseph Mouret’s Rondeau from Fanfares et Simphonies is evidently a popular piece at weddings), as well as modern songs for special occasions. The arrangements are by the two musicians and Jarle Storløcken; the booklet notes by the star trumpeter.

This stylishly played recording in first-rate sound was made at the aforementioned Cathedral during Norway’s lockdown in late August/early September 2020, with everyone working from late evening into the early hours of the morning to avoid the already minimized noise of the outside world.

The trumpet and the organ are both among my favourite instruments and the disc is a joyful listen from beginning to end.