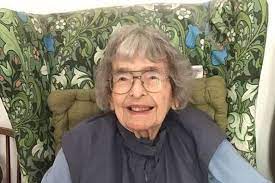 Born in Bournemouth, cellist Anna Lee Shuttleworth studied at the Royal College of Music where she was later a professor. She knew Jacqueline du Pre and once played duets with her. She gave recitals with pianist Bernard Roberts and eventually settled in Yorkshire. She enjoyed playing chamber music (and I heard her several times in this) but was best known as a teacher in schools, both at the RCM and privately (pupils included former BBC Young Musician of the Year, Natalie Clein.