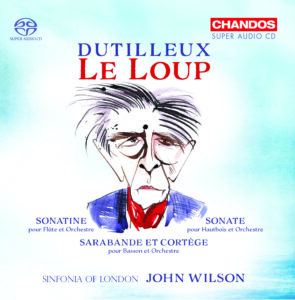 On setting out to review this release I thought it might only be of interest to those who are admirers of John Wilson and his magnificent orchestra.  Henri Dutilleux (1916-2013), although I recognised the name, his music was completely unfamiliar to me.  It is a small body of work including ballet, two symphonies, chamber, incidental and film music (this last qualifying him for inclusion here).

French music specialist Caroline Potter’s booklet notes tell us that he studied at the Paris Conservatoire, winning the prestigious Prix French de Rome in 1938, and in 1943 began a 20-year career working for French radio.  And he enlisted in the army as a stretcher bearer before the fall of France in September 1940.  Later in life he was the recipient of a number of other music prizes.

So, to the album.  Half its length is devoted to Le Loup (The Wolf), a Beauty and the Beast-like ballet in one act and three tableaux from 1953.  Anticipating a 20th-century composed work with a paucity of melody even bordering on the dissonant, I was surprised how accessible this colourful score is and really rather enjoyed it.

The three remaining items are all premiere recordings of Kenneth Hesketh’s 2019 orchestrations of Sonatine pour Flȗte, Sonate pour Hautbois and Sarabande et Cortège, written for the Paris Conservatoire in the 1940s, showcasing the stellar soloists of the Sinfonia: flautist Adam Walker, oboist Julian Koch and bassoonist Jonathan Davies.  Like the major work, I found that the music kept me involved and the whole orchestral sound is dazzling.

Even if it may not appeal to everyone, I reckon that with their fifth Chandos album JW and the SOL are on to another winner that will earn them plenty more well-deserved plaudits.

Sample it online if you can and you may be encouraged to join some celebrated major musicians – presumably including John Wilson – and now this reviewer (neither celebrated nor major) in appreciating the works of M Dutilleux, remembered in The Guardian as “one of the gentlest and most charming of men, with a delightful sense of humour … also inexhaustibly kind”.