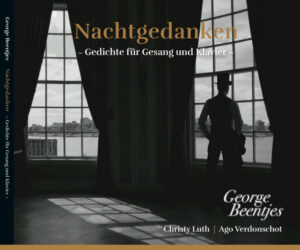 The self-styled “Gentleman Pianist” George Beentjes has, over some years, cultivated a defiantly distinct persona as a musician. In performances, he has a tendency to appear in 19th century period dress, sometimes even sporting top hat and cane. His musical persona is similarly in thrall to the music of two centuries ago, and shows a great affinity for German Lieder, though the composer himself is Dutch.

This release brings together some of George’s more recent works in the lieder form. This is the third disc available from the composer after a first album of solo piano works and a follow up for piano and voice. As the title suggests (to the German speakers out there), most of the works here have a nocturnal focus. We open with Trost für Anfänger, sung by Christy Luth, a setting of text by Friedrich Nietsche (himself a fine composer, but who found fame, as we know, for philosophical works). This is a wonderfully sensitive setting of the text, beautifully interpreted by the singer, who navigates occasionally quite cruel vocal lines. Awkward intervals aside, the lyricism shines through consistently in this setting and the song concludes with little sense of resolution, echoing the very peculiar text. Whilst the sound world here is romantic, the text is almost anything but and there is, to my mind, a very deliberate disconnect between words and music: while the text discusses the growth of a child into adulthood, whilst drawing similes between humans and pigs, the music maintains a wistful quality, more reflective in tone than perhaps the text would suggest, allowing the listener to consider subtext as well as text.

The baritone Ago Verdonschot (in his first ever studio recording), interprets the following three songs on the disc. Interestingly, while Luth is a very youthful singer, Ago Verdonschot has a far more mature voice, and comparing and contrasting the songs with voices of different ages makes for a very interesting listen indeed. Both, however, do a very nice job in communicating these often vocally challenging songs in their performances.

Nicholaus Lenau’s text Sonnenuntergang makes for more conventional romantic listening, though Beentjes is not one to shy away from unexpected tonal shifts and harmonies that draw upon a more impressionist sound palette. Indeed, the piano lines are among the most challenging aspects of all of these songs, which Beentjes is performing himself. With Erster Abschied, we find Nietzsche in more romantic vein as well and I would cautiously suggest that this and the previous song are the most successful of the baritone works on the disc. I have a slightly more reserved opinion of the title song Nachtgedanken, which sets a poem by Rilke. Most of the the song follows a somewhat subdued musical terrain, but it is rounded off by a rather heavier conclusion, which I found slightly sudden and forced in relation to what has been before.

The disc reaches its conclusion in the company of Christy Luth once again, this time singing Beentjes’ setting of Goethe’s Neue Liebe, Neues Leben, (once also set by Beethoven) which is a wonderfully introspective note on which to leave the collection.

The question that remains, of course, is how to approach an album of music so determinedly backward-looking in terms of its musical material. Once, however, one looks through the performative aspects of Beentjes’ works in terms of his stage persona and attire, we quickly find a composer’s own voice working in all earnestness, regardless of current trends and fashions. In short, this is Beentjes’ compositional voice, not some fashionably retro affectionate revisiting of a bygone age. Nor does it fit what might be described as a “modern romantic” idiom. Rather, it is a modern composer writing romantic music for contemporary audiences, which, while surprising, is ultimately endearing, especially for those interested in Lieder as well as great (if some lesser known) romantic literature in expert blends of text and music. Light Music fans will, I think, also find much to enjoy in these melody driven works and I can wholly recommend having a listen to this album on Spotify and other streaming services, or by purchasing the disc from George’s website.