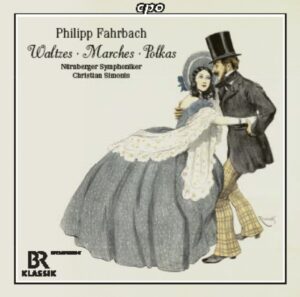 In the annals of Viennese light music, there are, quite understandably giants of the various forms, not least the Waltz King himself Johann Strauss II. One dedicated member of the Waltz King’s father’s orchestra was Philipp Fahrbach Sr., who would go on to become bandleader of the Vienna Hoch-und Deutschmeister Regiment. Later, when the regiment moved on and Johann Strauss Jr. established his own orchestra, Fahrbach Sr quickly found himself eclipsed as a musician as well as a composer. Political forces were also at work, with Strauss II appealing in some respects to a youth market and he had also sided with the students during the 1848 revolution, giving the younger composer a bit of firebrand reputation. Fahrbach Sr. received a royal appointment, which, whilst making him quite comfortably off, still left him in the shadow of Strauss II’s appeal. Philipp Fahrbach Sr.’s son (named after his father) was also a prolific composer, although his work never made quite the impression on the music world that his father’s did.

This disc goes some way to redressing this imbalance, with the vast majority of material on the disc being by Fahrbach Jr., with only three works by the father. Thankfully it reveals Fahrbach Jr. as a very able composer, capable both with melodic invention and with inventive use of orchestration. There is no mistaking the works here for anything other than Viennese pieces, but I see no reason for them not to occupy programmes alongside members of the Strauss family, Lehar, or other popular writers of operettas and dance music. The opening number on this disc sets a delightfully lighthearted tone, with a jolly Galopp, Storchschnäbel, depicting storks billing and pecking for food (complete with strange bird calls!). The popularity of this work was undeniable at the time, with editions being prepared for military bands, piano solo, chamber ensembles and salon orchestras almost immediately.

Much of the rest of the disc follows suit in a lighthearted manner, though there is much variety on display both in the musical material and, sadly, in quality. It ranges from the frankly insipid and uninspired, such as the Souvenir a Madrid Waltz-Mazurka and Columbus March, to the infinitely listenable and downright beautiful Traum der Liebe waltz. Thankfully, the listenable and fun titles far outnumber the less inspired ones, but it does rather mean that the disc suffers a slight slump part way through.

The slump itself would be more noticeable, were it not for the finesse of the performances from the Nürnberger Symphoniker under Christian Simonis. This is the fifth release that Simonis has produced for the CPO label and he is clearly very much at home in this lighter Viennese repertoire, particularly by lesser known composers, such as the Fahrbachs, Millocker, Gung’l and Bilse. It is efforts like this that will hopefully reveal to new listeners that there is far more to music of this period than just a few household names. Added to this, we have performances featuring all the wit, humour and heart that the music demands. Perhaps it is a small thing to note, but I was especially struck here that the string and woodwind combinations were particularly nicely balanced, with neither part gaining the upper hand over the other, which to me is a key timbral feature of light Viennese music.

The final couple of pieces are by Fahrbach Sr., both guaranteed to raise a smile. First s’ Schwarzblàtl aus’n Weanerwàld waltz in ländler style boasting an augmented orchestra with bird calls rhythmically interspersing the memorable melody, while Talmi, a fast polka, complete with ecstatic shouts from the players as well. Much of the music has a slight martial edge, which is understandable, given the background of the composers, but more often has the unmistakable party atmosphere of late 19th century Vienna. Functional music though it may be, it remains a thoroughly entertaining disc.