FRENCH MUSIC FOR THE STAGE 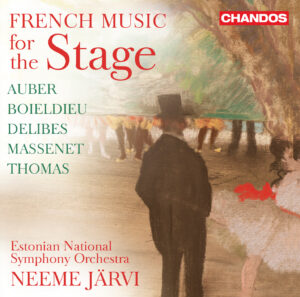 The estimable Estonian ensemble under its fellow countryman and former MD, the highly regarded veteran maestro Neeme Järvi (described by his record company as “legendary”), bring us another enjoyable classical-lite Chandos collection; this time of melodic lesser-known French works for the stage from the 19th and early 20th centuries – the kind of music I recall that Sir Thomas Beecham and his Royal Philharmonic Orchestra played to perfection.

The first four of the 23 tracks are overtures by Ambroise Thomas, Daniel-François-Esprit Auber and François-Adrien Boieldieu (2), which were all composed for staging at the Opéra Comique in Paris.  This was the form of opera in which spoken dialect alternates with self-contained musical numbers.

Next is incidental music written by Léo Delibes for a Victor Hugo play: Scéne du Bal and Vielle Chanson from ‘Le Roi s’amuse’ (The King Amuses Himself / The King Has Fun).  This is subtitled ‘Dance Tunes in the Olden Style’.  They include a lovely Pavane, while Vielle Chanson (Old Song) features the mandolin.  The play was first performed in 1832 but banned after one performance for being reckoned an attack on the reigning monarch, Louis Philippe.  It was later used for Verdi’s 1851 opera ‘Rigoletto’.

The last and longest work, at just under 30 minutes, is Jules Massenet’s one-act ballet ‘Espada’ (Sword).  Set in Spain, with a Boléro and Fandango, it is a bit reminiscent of Bizet’s ‘Carmen’ in pieces such as March of the Toréadors and Scène des Cartes (The Card Game).

There is a 31-page booklet with informative notes on the works from the musicologist Nigel Simeone, the author of several books on Leonard Bernstein, and comprehensive pen pictures of the orchestra and conductor.

Recorded in maestro Järvi’s beautiful home city of Tallinn during May 2018 and 2019 – when the thought of a pandemic would have been the stuff of nightmares – with generous timing and the usual sumptuous Chandos sound, this attractive album gives the listener very good value, especially if obtained direct from the record company at  www.chandos.net