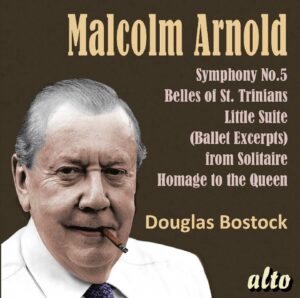 2021 marks the 100th anniversary of Malcolm Arnold. Born in Northampton, United Kingdom- one of a small collection of British composers born in the same town – Arnold, like his friend William Alwyn- has been quite well served by record companies from the early 1950s when his orchestral and film music would be released. However there are works that still emerge – neglected in the past – that get an airing and this reissue by the super-budget label, Alto, does the composer proud which includes three works that have not appeared much in record releases and one world premiere recording- the Symphonic Suite: Machines, Divertimento No 2 and the Second Little Suite.

For me, it has been a welcome trip down memory lane: partly because it was the Little Suite No 1 that I featured in one of the first concerts including Arnold’s music way back in the 1960s. Little did I know that for two spells of my life I would be in contact with the composer. The first was when I was Chairman of the National Association of Youth Orchestras and Malcolm was its President. The second was when Malcolm agreed to become President of Trianon Music Group – a group which I founded in 1959.

Back to the contents then of this programme, and it has to be said that for all the enjoyable items featured, the reissue of Bostock’s recording of the Symphony No 5 is a reminder that Arnold has to be classed alongside some of the great symphonists of the twentieth century. When others were predicting the symphony was “dead” as a musical form, Arnold was showing how wrong they could be. The musical structure is tight, the tunes abound and the orchestral scoring is a master class in economy. Like Shostakovitch, Arnold knew that “less” was often better than “more”.

The second movement opens with a melody that bears a striking resemblance to that he uses in the Peterloo Overture.  The fragility and dignity of that melody has long provided one of those “ear worms” that can be both a joy and downright nuisance. Arnold has done that in plenty for me over the years, but I am not complaining. Just listen also to the way that Arnold places the reprise of the tune at the close of the symphony. It fairly tugs on the heart-strings.

The Symphony was composed in 1961 by this “rogue genius”, and with it he pays homage to four of his friends including the celebrated young British horn player, Dennis Brain; the equally celebrated clarinettists Frederick Thurston, choreographer  David Paltenghi, and Gerard Hoffnung – another “rogue genius” who would inspire Arnold to write music that demonstrated the fun side of the composer’s dark character. That fun side of Arnold also emerges in the third movement of the Symphony with a typical Arnold rhythm that might have accompanied one of the characters in The Belles of St Trinians (another work included in this reissue).

The recording, now 20 years old, sounds as good as I recall then, and the playing of the two orchestras is impressive- especially bearing in mind that this is music that they probably had not encountered in their usual programming. Snap this bargain up! You will not be disappointed.