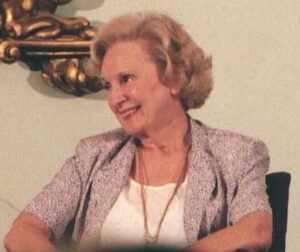 Leicester-born mezzo-soprano Joyce Wright has died at the age of 98. Wright grew up in Glasgow and, from the age of 8, studied music at Bearsden Academy. The family moved back to the English Midlands and Wright went on to sing in choirs directed by Sir Malcolm Sargent and Ernest Nash, win prizes at music festivals and play the piano professionally for a dance band. She also performed in amateur theatricals, including with the Glasgow Players.

Wright sang with the D’Oyly Opera Company  from 1947–62 and excelled in the principal soubrette roles such as Phoebe (Yeoman of the Guard), Mad Margaret (Ruddigore) and Pitti Sing (Mikado). R. F Bourne, in his book Joyce Wright: Memories of the D’oyly Carte, said that se was known ‘for charm and daintiness’ but with ‘plenty of attack when necessary’ in these roles.

She later sang G&S roles as a freelance, and produced amateur G&S productions throughout England for amateur companies.