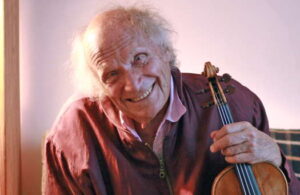 Gitlis was born in Palestine, then a British-mandated territory. He was a violinist notable for his flashy brilliance. After working with ENSA from 1939–45, he gave a Wigmore Hall recital in 1946. He appeared notably in virtuoso concerts playing pieces by Paganini, Wienaski etc. and also more modern composers such as Hindemith and Bartok. He didn’t confine himself to classical repertoire but played with the Rolling Stones and other pop groups.