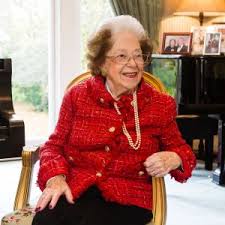 Leeds-born pianist and teacher, Dame Fanny Waterman, has died aged 100. She trained at the Royal College of Music and had an acclaimed concert career (I recall hearing her play a Mozart concerto on “the wireless” in 1949) but her main calling was as a teacher. Her pupils included Ben Frith, Allan Schiller and Michael Roll. She continued teaching for the rest of her life but surely her greatest achievement was to found the Leeds International Piano Competition in the 1960s. Winners were to include Murray Perahia, Radu Lapu and her own pupil, the aforementioned Michael Roll who won the inaugural competition. Her determination, as teacher or festival organiser, was legendary. She wrote a book of memoirs and in 2006 was made a DBE and received the freedom of Leeds.