THE MAGIC OF MANTOVANI 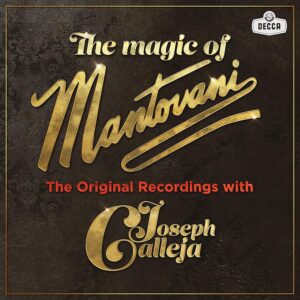 The Original Recordings with Joseph Calleja

When as a long time Mantovani admirer I first joined the Robert Farnon Society, his name was hardly ever mentioned. It seemed to me that he was thought of by my fellow light music enthusiasts as being too “popular”, much as some people now think of André Rieu.

Then Michael Dutton’s started re-releasing practically all Annunzio’s albums on his Vocalion label in 2-on-1 form (several still available) with the Society’s Journal Into Melody magazine enthusiastically reviewing them. And folk rightly began to really appreciate him as the great maestro he was.

Monty sadly died 40 years ago having been, with his magnificent orchestra, the first recording artist to sell one million stereo albums. At one stage in 1959 he had six albums simultaneously in the US Top 30. His success was largely due to arranger Ronald Binge’s “cascading” strings effect, starting with Charmaine in 1951, that really caught the public’s attention and approval. Dominic Fyfe’s very interesting booklet notes include the rumour that Monty received 3000 proposals of marriage across his lifetime.

Now with this release (announced months ago as ‘Charmaine: Mantovani & Me’) Decca are marking the 80th anniversary of Monty’s signing – he must have made shedloads of money for them – by imaginatively remastering arrangements from the 1950s and ‘60s, adding the voice of the present-day Maltese tenor Joseph Calleja, who is much sought after and acclaimed around the globe, recorded with original microphones from the period of the type Mario del Monaco would have sung to for a 1962 LP with Mantovani called ‘A Song for You’, which was big hit in Japan.

The last-named feature a special guest appearance by Grammy award-winning American soprano Renée Fleming on Somewhere, and introduces Operalia-winning Italian-Canadian mezzo Emily D’Angelo on I Feel Pretty and the duet Tonight with Calleja.

It is wonderful to have the double delight of such great voices allied to that “tingle factor” from the fabulous string sound, and I enjoyed this album a lot. I hope you do, too.