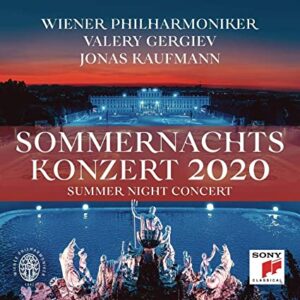 Reckoned to be the world’s biggest annual open-air concert, the elite Vienna Philharmonic Orchestra aims for a summer occasion to match that of New Year’s Day with this annual event in the beautiful setting of its home city’s Schönbrunn Palace Baroque Park, an UNESCO World Heritage site. This year it had to be postponed from June until September before a smaller audience because of Covid-19, so Sony have done well to get the live recording into the shops for Christmas. It is normally broadcast on TV and radio in more than 60 countries and thus reaches an audience of millions.

The theme for this year is Love and the concert opens with the Der Rosenkavalier – Suite: Presentation of the Silver Rose by Richard Strauss (a favourite piece of mine: it must be those whooping horns again) and ends with Wiener Blut (Vienna Blood) by Johann Strauss II. There is some appropriate Wagnerian Love Music and the other orchestral tracks are Offenbach’s The Tales of Hoffmann: Barcarolle, Mendelssohn’s A Midsummer’s Night Dream: Scherzo, Khachaturian’s Spartacus: Adagio of Spartacus and Phrygia, and Maurice Jarre’s Doctor Zhivago – Suite (10:26), which for me is the outstanding track. The Wagner and last two named are first performances at a VPO concert.

The acclaimed tenor and opera star Jonas Kaufmann sings four items including the famous “Nessum Dorma”, and Vienna, City of My Dreams, as well as arias by Massenet and Kálmán. Conducting his fourth Summer Night concert is one of the world’s greatest, the Russian maestro Valery Gergiev – he of the fluttery fingers and toothpick sized baton.

The concert was enjoyable on TV – there is a DVD and Blue-ray available to buy– and this is a very good nicely filled album with, if you do not want it all, some tracks of particular interest well worth downloading by the light music enthusiast.