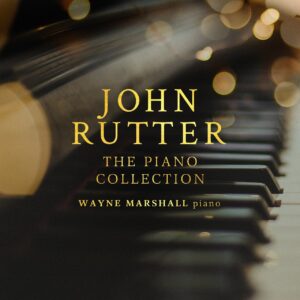 John Rutter (born 1945) is a very prolific composer of mainly sacred choral works, many associated with Christmas. He has made umpteen recordings (Discogs lists 97) either as composer, conductor, arranger or producer.

This is the first time he has transcribed 16 of his shorter choral works for the piano so, without the words, the album including eight carols can be played to enjoy the melodies throughout the year.

What Sweeter Music is the opening track and possibly Rutter’s best-known composition. Then among the others are For the Beauty of the Earth, A Gaelic Blessing, The Colours of Christmas and Candlelight Carol.  The penultimate track is Mary’s Lullaby, liked by the great jazz pianist George Shearing, while the 17th and final track (Epilogue) is dedicated to his memory with the piece being played as he might have played it.

The album was produced by Rutter in the UK and recorded during May and September 2020 on the island of Malta, the home of Wayne Marshall: a pianist noted for his Gershwin recordings, as well as a respected organist (he has performed at the BBC Proms) and conductor. He is also credited as Recording Engineer for this disc.

Beautifully played, this is another release to hearten us during present dark Covid-dominated days, and a reminder to hope and pray for better tomorrows.