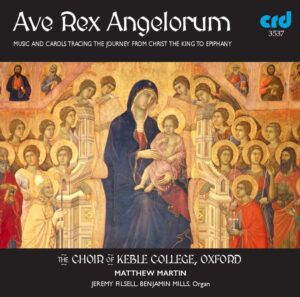 To complement our normal Festive listening from Leroy Anderson, Percy Faith, Arthur Fiedler, Mantovani, André Rieu et al, your thoughts may turn to a vocal collection of Christmas music and you might like to consider this new release from the Keble College Choir. One of the leading mixed-voice choirs in Oxford, on this album it comprises eleven sopranos, seven altos, seven tenors and eight basses, who are either choral scholars, volunteers or lay clerks.

The very fine acoustics in the building are evident throughout the disc and nowhere bettered than on John Taverner’s closing title track (Hail to the King of Angels), which Jeremy Summerly rightly describes in his most helpful booklet notes as “attention-grabbing”. All the words to the music are also included.

Matthew Martin, born 1976, is Precentor and Director of Music at Gonville & Caius College, Cambridge and was DM at Keble from 2015-20 where he was also Artistic Director of the annual Keble Early Music Festival. Here he not only conducts but has composed four of the works, arranged another and accompanies – he had been an organ student in Paris – on the classic hymn Of the Father’s Heart Begotten. The bulk of the first-rate organ accompaniments are by Jeremy Filsell with Benjamin Mills playing on three tracks.

CRD, founded in 1965, is an independent company based in Truro, Cornwall. This album of uplifting classy choral singing is widely available at a good price of around £10.