Humperdinck: Music for the Stage 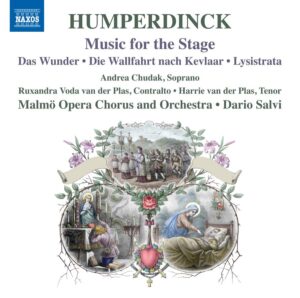 Despite penning one of the best known operas of the post-Wagnerian era, Humperdinck’s catalogue of works is unjustly neglected, perhaps because of the shadow of Hänsel & Gretel but also the odd political point that may have been thrown up by the composer’s history, such as his statement of German allegiance in the run up to the Great War. It seems a hardly surprising action for a man who felt great kinship to the land of his birth, however, and one hopes that he has not joined the ranks of overlooked German composers who were considered “on the wrong side” of history, however true that may have been in hindsight.

What we have here is a bit of a box of musical oddities and treats. As always, Maestro Salvi has reconstructed much of the music in the release as well as providing a coloured image for the CD cover. Musically, the works here vary from the almost purely functional, written clearly to follow a brief (eg. the Fanfare in the Merchant of Venice suite, which quite simply and adeptly does what it says on the tin), to the downright inspired, such as the final movement of the same suite.

I am thrilled to mention that the Lotter arrangement of Humperdinck’s score for Das Wunder actually came from the Library of Light Orchestral Music and it is the first time it has been recorded. This is in fact music for the screen, more accurately a multimedia performance, featuring a silent film as well as a live cast and orchestra in the theatre. The film itself (by Michel-Antoine Carré, based on a play by Max Reinhardt) is set to be re-released on DVD and conductor Salvi is due to conduct the reconstructed score for this release. Again, there are flashes of inspiration here after a somewhat generic organ prelude, though one wonders if the music may actually outlast the film, which by today’s standards is probably an overly idealised affair.

The real highlight, however, is the premiere recording of Die Wallfahrt nach Kevlaar, a very brief cantata for choir, orchestra and soloists, telling the tragic story of a mother and son who embark upon a religious pilgrimage in the hope that the latter’s health problems will be cured. Humperdinck’s flair for orchestration is clear right from this very early work, in which string textures swirl around the singers in the opening bars and multiple internal melodies are revealed as the work winds on. Whilst not a substantial work, I can see this being very popular among choral societies if only a few more knew of its existence – something this disc should surely aid!

The Malmö Opera Orchestra and Salvi respond very well to this music, bringing out Humperdinck’s characteristic warmth of writing, particularly for the lower brass and strings. The chorus sounds beautiful in their all-too-brief times to shine. Having previously had serious reservations about tenor Harrie Van Der Plas in Salvi’s previous release of Jery und Bätely, I am happy to report that this appears to be far more appropriate repertoire to suit his talents and he really does shine in Die Wallfahrt. He is well matched with the post-Wagnerian orchestral colours and he characterises his part admirably. There are, however, still a couple of places in which I found the dynamic variety lacking (most notably in the first movement of the Merchant of Venice suite). Meanwhile Ruxandra Voda Van der Plas and Andrea Chudak execute their roles superbly – it is a shame in fact that we couldn’t have heard more from Mrs. Van Der Plas, as her contralto was just right in her brief appearance in the Merchant of Venice suite. The orchestra gets plenty of opportunities to shine and it has been noted elsewhere that the opening track Die Heirat wider Willen, Act II: Prelude may be at the top of the list of Humperdinck’s operas deserving a revival.

While I found the Lysestrata suite perhaps less striking than the other works on this disc, what we have overall is an insight into Humperdinck’s very particular sound world, as well as his adaptability for multiple platforms: this is no ivory tower composer. This is a composer working hard and aiming to please his commissioners and audience in equal measure and his craft in doing so is impeccable. Are all of the works masterpieces? Certainly not, but are they all deserving of multiple listens and more frequent performances? Absolutely. DA