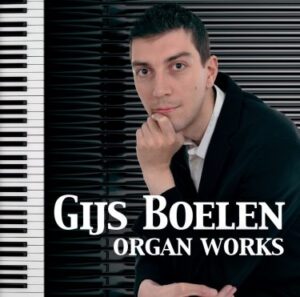 Cards on the table: I don’t always gravitate towards organ music, so when I encounter a disc such as this one, which I found instantly appealing and entertaining, I really do sit up and pay attention. Gijs Boelen is a Dutch organist, pianist and composer with influences ranging from staples of the organ repertoire to lesser internationally known composers from the Netherlands, progressive rock bands and, of course, Light Music.

Turning the single instrument into a one-man orchestra, as the best organ composers do, Boelen here presents us with a CD entirely of his own compositions, displaying all of these influences and deploying them in a wide variety of moods and instrumental colours. Bringing primarily secular influences into the repertoire of the church organ is original in itself, though spirituality without any clear religious underpinning shines throughout.

The opening Folk Suite, which begins with a Hop-Jig movement, immediately conjures a sense of a bygone age (and indeed bygone instruments) and alerts us immediately to the fact that the composer is bringing musical influences from other times and spaces into his own instrumental canvas. There are shades of both Dutch and English folk music at work in this suite (with more than a hint of the ubiquitous Greensleeves highlighted in the central slower movement, whilst boasting highly effective use of open 5th harmonics) and the work is rounded off with the appropriately titled Joyful Dance – while the organ more than does the music justice, I can imagine this suite also being effective as an orchestral work.

Moto Ostinato, the composer tells me, is one of his proudest achievements so far in his own works. Having worked on the piece for some time, Boelen has produced a substantial single-movement work based, as the title suggests, on a single ostinato. Using minimal, though arguably not minimalist material to build upon, he weaves a textural work showcasing his instrument’s great variety and drawing upon contemporary pop music references to reveal possibilities for the organ not usually found outside of theatre organ circles. Whilst lengthy, it is not so long as to cause this reviewer to disengage or lose interest at all and  also references, as the title suggests, his fellow countrymen Simeon ten Holt’s Canto Ostinato as well as Basso Ostinato of Dick Koomans.

The Light Music influence is perhaps clearest in the Folk Suite and the Seven Miniatures. With the latter, Gijs arguably takes the opposite approach to that found in Moto Ostinato and presents a suite of very short ideas, each with their own individual characteristics, though all included on a single track on the disc. The movements do have individual titles and directions, which the composer has deliberately omitted from the liner notes on the CD, so as to avoid being labelled as programmatic and to allow the listener to draw his or her own conclusions about each of the miniatures.

“World music” influences appear in the Arabic Dance, emphasising this musician’s interest in the organ as an instrument with truly multicultural potential, while the tracks Just Relax and God is a DJ again reference pop culture (the latter, a reference to a popular dance music track), whilst introducing an element of spirituality, which seems to me more than just tongue-in-cheek, but hinting at some kind of cosmic musical influence, which all can feel.

Boelen is, by his own admission, not a virtuoso musician (though the music has clear challenges, apparent to even the casual listener), but crafts music that is direct and, as the best Light Music does, has instant appeal. It also boasts a real flair for the mixing of musical influences in unexpected ways, producing works of originality as well as entertainment in which a composer’s unique voice is detectable. I shall look forward to hearing more!

The CD can be purchased here: https://www.gijsboelen.nl/cd-gijs-boelen-organ-works/