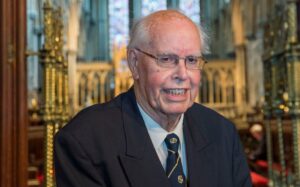 Arthur Wills, Coventry-born and one of the best of 20th Century organists, was associated with the music at Ely Cathedral for much of his life, Assistant from 1949 and from 1958 to 1990, Director of Music. He was noted for his compositions and not just for organ. Works included an opera Winston and Julia (after Orwell’s 1984), many song cycles, Fenlands, a symphonic suite and A Muse of Fire, both for brass band and organ, and Etheldreda Rag in the Scott Joplin idiom. For his and other choristers he composed service settings (a Passiontide Mass and two Common Services) and the carol There is no Rose of such Virtue. Other works, mainly for organ included The Vikings, Variations on Amazing Grace, a Carillon and The City of Ely March. He made many recordings, held a professorship at the Royal Academy of Music and wrote several books, including an autobiography.