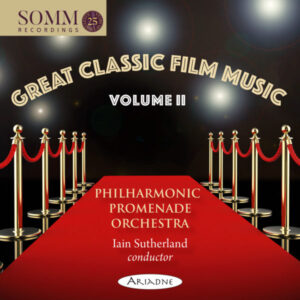 This is a pleasing surprise follow-up to Great Classic Film Music (ARIADNE 5006), the virtues of which I extolled in 2019.  The track selection here is noteworthy for being less hackneyed than in many of the comparable albums in the catalogue.

That said, there is not a lot to add about the album as it is very much of the same fine quality as before.  17 tracks this time: beginning with Jerry Goldsmith’s ‘Star Trek: The Next Generation’ – Main Title and ending with Maurice Jarre’s ‘Lawrence of Arabia’ – Main Themes.  Both these were recorded in concert, as were Alan Silvestri’s ‘Back to the Future’ – Main Title, George Gershwin’s ‘Funny Face’ – Overture, Burton Lane’s ‘Finian’s Rainbow’ – Prelude (Main Title), Robert Stolz’s ‘Spring Parade’ – March, Kurt Weill’s ‘September Affair’- September Song, and William Walton’s ‘Richard III’ – Prelude.

The studio recordings are Lalo Schifrin’s ‘The Eagle Has Landed’ – Main Title (one of three Sutherland arrangements), Cole Porter’s ‘Evil Under the Sun’ – Title Music, Benjamin Frankel’s ‘So Long at the Fair’- Carriage and Pair, Wolfgang Amadeus Mozart’s Elvira Madigan (Piano Concerto No.21 – Andante) played by Harry Rijke; together with pieces by John Barry, Ennio Morricone, Erich Wolfgang Korngold, and more Walton.  All the recordings were made in 1988-89 or 1994-95, and once again have been specially remastered to modern audio standards by Paul Arden-Taylor.  Two of the tracks have been issued in earlier transfers.

As is widely acknowledged, there are few better guides through this increasingly popular genre of music than the veteran Scottish maestro, and the Dutch orchestra play superbly under his direction.  Don’t miss adding this one to your collection; and let us hope that Iain might have some more similar tapes in his archive.