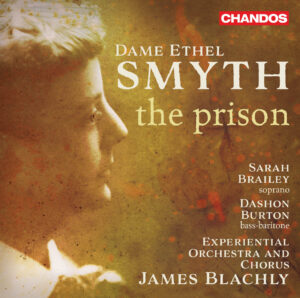 By the time Smyth composed The Prison, she was bracing herself for the end of her musical career, brought about by rapidly encroaching deafness. Upon the death of one of her oldest friends, H.B. Brewster, Smyth found herself re-reading his book The Prison and soon resolved to set it, in some way, to music. She and Brewster have been rumoured to have been lovers, though Smyth, by her own admission, did seem more comfortable in same-sex relationships so this is possibly less likely. However, her closeness to Brewster does make one wonder. Once asked in his company “why don’t you just get married and have done with it?”, Smyth wryly retorted “Because we don’t want to have done with it!”.

The Prison was to be Ethel Smyth’s final major work and it is a stunning note on which to go out. I would perhaps even go as far as to describe it as her finest work, though it is up against some stiff competition. Described in the score as a Symphony for Soprano, Bass-Baritone, Chorus and Orchestra, it is the closest the composer ever came to writing a conventional symphony – and conventional it ain’t. A setting of a text in which a prisoner awaits his own death, the central figure of the prisoner enters into a dialogue with his soul (voiced by a soprano) and a chorus of voices, either mortal or immortal, frequently interject. The story is effectively one of the prisoner discovering the immortality of his spirit, despite the end of his current life and while the piece starts in as grim a C Minor as you’re ever likely to find, the shadows really don’t last long and it is a far more life-affirming piece than one might at first expect.

Its closest cousin in British music is Elgar’s Dream of Gerontius, to which I feel it does stand favourable comparison. The main differences are that this is a secular, not religious work and that it moves gradually from the darkness to the light at a very deliberate pace, which has led some to suggest that it does not necessarily contain as much variety as Gerontius. I would argue that the gradual development of the piece is responsible for this: the mood shifts so carefully that the changes in overall tone are almost imperceptible, though one still does hear the climaxes of the work with considerable force.

The performance on this disc, I would hope, should prove enough to convince any listener that this is a very major work indeed. Dashon Burton as the prisoner is an absolute knockout and a real talent to watch. His prisoner is mournful, but ultimately transformative as his journey opens before him, the vocal quality is warm and attractive throughout and the enunciation is crystal clear from beginning to end. Sarah Bailey as The Soul has a very sweet tone and is a delight to listen to, even if her striving for that tone does mean her words are occasionally harder to discern. However, this is a very minor quibble and both soloists are names everyone should watch out for. I really don’t think many could have done better jobs with these occasionally treacherous vocal lines! The chorus does a remarkable job at keeping the text as clear as humanly possible in their passages and I can’t fault the blending of voices at any point. The brilliance of Smyth’s orchestration is shown in its full glory on this recording and the Experiential Orchestra (great name!) under Blachly doesn’t let any minute detail go unobserved.

While I may not have the full strength of my convictions that we are listening to a long lost masterpiece here, I do firmly believe that what we have in this recording is a revival of a major work, which deserves plenty of attention and many more performances. Highly recommended all round. DA