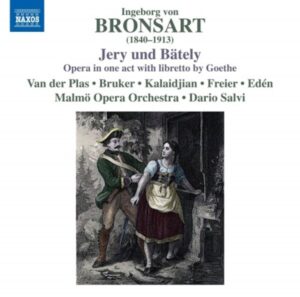 A 19th Century Singspiel not only featuring a strong female lead (surrounded by a bunch of rather useless men!), but written by a female composer is, of course just one of the reasons to recommend this recording. Helping to establish composer Ingeborg von Bronsart’s reputation as a successful stage composer, Jery und Bätely also boasts a libretto by none other than Johann Wolfgang von Goethe, recounting a tale of rural life and a farcical love story. If that alone doesn’t persuade you to quickly snap up this recording, I’ll go one further: it’s conducted and reconstructed from the original manuscript by friend of the LMS Dario Salvi with a stupendous orchestral sound, excellently recorded to make a really persuasive case for this little known work.

The recording is a welcome addition to my library, as it is highly unlikely we’ll see any stage performances of the piece any time soon, which is unfortunate. That said, Salvi tells me some houses have already expressed interest in mounting the piece. I do, however, have reservations about some aspects of the recording, in particular the two romantic leads. Caroline Bruker has a lovely sweet tone, but it is a little thin at times and, since the part generally demands considerable range, it does occasionally become noticeable. Personally, I would have preferred a rather more rounded tone but opinions are our own and others’ may differ, so don’t let that dissuade you from listening. Tenor Harrie van der Pals fulfils the role of Jery and here, the problems are considerably greater, I feel. There are times at which Jery sounds like he is struggling to be heard over the orchestra, with the result that some of his numbers sound very over-blown and lacking in sensitive phrasing. Audible vocal cracks appear on one track and the lack of dynamic variety in all but very rare occasions in the performances of both leads really does become wearing.

However, some of this connects to the music itself, which the performers obviously cannot be blamed for. Bronsart’s score is full of charm and melodious interest, but it does lack dynamic and timbral variety in the orchestration early on. The overture is a stunner and the overall complexity and cleverness of the music progresses as the story does. Indeed it is very easy to see why this became so popular in the composer’s lifetime.

The Malmö Opera Orchestra under Salvi sound superb and this is the first of Salvi’s recordings for Naxos about which I have no complaints regarding the standard of the recording itself. The overall sound quality is very high and really does the piece credit. Reservations aside, you would be hard pushed to find a more loving reconstruction and revival than this one (Salvi reconstructed the score himself and once again has hand coloured the cover art) and all of the performers are clearly committed to the music. It may sound an odd thing to note in a primarily musical recording, but it is also very well acted, which I think really matters where there is plenty of dialogue, as there is here. Don’t hesitate to acquire this recording if you’re looking for an unjustly neglected work deserving of more outings. DA