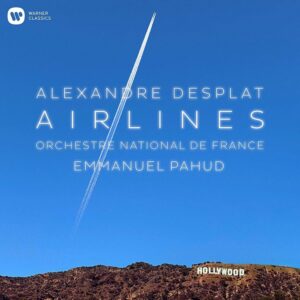 Regular readers will know from my review of ‘Little Women’* in February this year that I regard Alexandre Desplat as second only to the great John Williams as a composer in the world of film music.  Following that earlier album, we now have this further welcome selection of his work.

The young Desplat studied piano and trumpet before choosing the flute as his main instrument, and featured here is one of today’s finest flautists, Franco-Swiss born Emmanuel Pahud, principal flute in the Berlin Philharmonic Orchestra.  He is accompanied by the Orchestre National de France, conducted by Desplat himself.

All the works are world premiere recordings, either reimagined versions of Desplat’s film scores, including Oscar winners ‘The Shape of Water’ and ‘Grand Budapest Hotel’, or original works, like the longest item: Pelléas et Mélisande Symphonie concertante.  The album’s title track is an expressive piece for solo flute.  ‘Girl with a Pearl Earring’ is a film about the Vermeer (Colin Firth) painting’; ‘Birth’ was directed by Ang Lee; and ‘Lust, Caution’ starred Nicole Kidman and Lauren Bacall.

The booklet has 20 pages in English, including two fascinatingly informative interviews, conducted by Denis Verroust, with M Desplat: “From the studio to the stage” and “Exploring new territory”.

This is another attractive album that, with more than 100 film scores alone under the composer’s belt, could surely have given us more than under an hour’s music.

Alexandre Michel Gérard Desplat was born in Paris in 1961 to a Greek mother and French father.  We learn from his biography that, inspired by the works of Jarre, Hermann, Rota and Delerue, he expressed his desire to compose for Cinema early on but really made his decision after listening to John Williams’ score for ‘Star Wars’.

* Since my review appeared, ‘Little Women’ has added to Desplat’s many musical accolades with the International Film Critics Association Award for Best Original Score for a Drama Film.