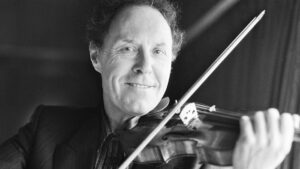 Vienna-born violinist Gruenberg fled the Nazis and settled in London post-war. He achieved distinction not only in the Viennese classics, especially Beethoven, but also in premieres by modern English composers such as Benjamin Britten, Malcolm Arnold, John McCabe and Richard Rodney Bennett. He was, however, an all-rounder and worked on backing tracks for the Beatles. He led the LSO and Stockholm Philharmonic; he played chamber music in a trio with  Edmund Rubbra and William Pleeth, and taught at the LSO and GSM.