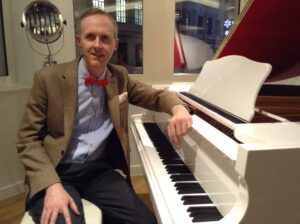 Martin began piano lessons at the age of seven and went on to study at the Royal College of Music graduating in 1988. His interest in light music grew from hearing the BBC 60th anniversary album On the Air. Having been Musical Director for many amateur productions in South East London ranging from Guys and Dolls to The Magic Flute, he is in regular demand as an accompanist, and has also created arrangements for the Aspidistra Drawing Room Orchestra, the award winning female a cappella group Just Voices and his own Palm Court Trio. More recently he has given presentations and performances for the London Light Music Meetings Group. He is currently Pianist and Music Manager at the Royal Academy of Dance, and became conductor of the Eltham Park Pleasant Sunday Afternoon Orchestra in 2016.