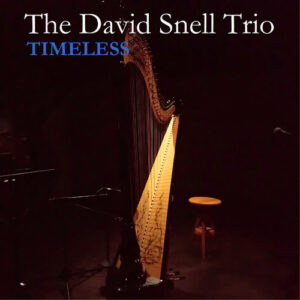 Jazz harpists are a very rare breed! Indeed, it is difficult to think of more than a handful in the entire world, nearly all hailing from the United States.

Pre- eminent amongst this select group is our own ‘home-grown’ David Snell, a consummate musician of many talents.

For over five decades, his career has included performing as a solo and orchestral pianist, (both classical and jazz), film- and library-music composer, (he currently continues to compose and arrange), conductor of the BBC Radio Orchestra and of numerous film-scores, and harpist in the orchestra of the Royal Opera House, Covent Garden. On this newly-released CD, his harp is taken in a new and unusual direction.

David recorded several jazz-harp LPs over the times, but these almost always contained titles which were specified by their record producers. He was very keen to assemble a programme of his own favourite pieces and a good many years ago, the late Derek Boulton issued the result on his Horatio Nelson label. Now excellently remastered, (by Graeme Boyd), it is appearing in CD format for the first time.

The twelve tracks are all David’s interpretations of well-known ‘standards’, including Secret Love, All the Things You Are, Tea For Two, Stella By Starlight, Here’s That Rainy Day, etc. His background as a jazz pianist is very evident in his phrasings and improvisatory ideas.

The sleeve-note has been reproduced from that on the original LP. It pays a great compliment to David Snell and was written by no less a person than Robert Farnon, for whom David played harp on many occasions.