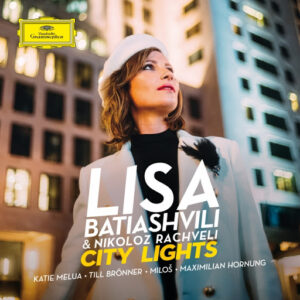 This is a winner in the ‘crossover’ album stakes, taking its name from the 1931 Charlie Chaplin film.  Georgian-born German Lisa Batiashvili is considered special even among the very many fine violinists of her generation, praised by both audiences and fellow musicians for her virtuosity and sensitivity.  On this new release she has chosen 11 works with memories of places that have been important in her life and career so far.

The introductory track ‘City Memories’ is a 7-minute tribute to Chaplin including his Smile and The Terry Theme from ‘Limelight’.  Next, for memories of Munich, is J S Bach’s Ich ruf zu dir, Herr Jesu Christ (I call to you, Jesus Christ); followed by Michel Legrand’s Paris Violon; and Ralph Maria Siegel’s Ich hab’noch einen Koffer in Berlin (I’ve left a suitcase in Berlin ) – a hit for Marlene Dietrich – featuring  the trumpet of Till Brönner and piano of Nicoloz Rachveli, who conducts the orchestras and has also arranged a number of the tracks.  The playing by the Rudfunk-Sinfonieorchester Berlin is first-rate throughout, as is the Georgian Philharmonic Orchestra on the Piazzolla and last three tracks recorded in their home city.

The next piece, for Helsinki, is the traditional Evening Song; for Vienna, the Furioso Galopp from Johann Strauss I; for Rome, Morricone’s Love Theme from ‘Cinema Paradiso’; for Buenos Aires, the tango master Piazzolla’s Adiós Nonino – Vuelvo al sur – Buenos Aires hora cero with the popular guitarist Miloš Karadaglić; and for New York, the Largo from Dvorak’s New World Symphony, arranged by Lisa’s father.

Lisa’s is also joined by fellow Georgians Katie Melua (the song’s singer/composer) and her brother Zurab (guitar) on No Better Magic in praise of London; Stephan Koncz’s The Lark, after a Romanian folk-song, is for Bucharest; and for Tbilisi, his birthplace, a medley of four pieces from the pen of Nicoloz Rachveli on themes by Giya Kancheli, who until  his death in 2019 was Georgia’s leading composer and had become part of the two-year project to record this disc.  Rachvali himself was the prime mover in Ms Batiashvili’s imaginative venture.

Being an admirer of her classical recordings, I am pleased to discover Lisa’s lighter side.  Recommended as one of those albums that gets even better the more you play it.