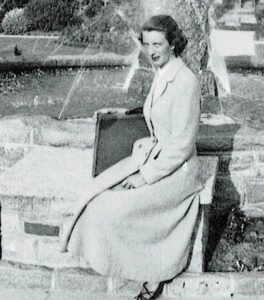 I first met Michelle in 1989 when she was coaching the flute section of the Brighton Youth Orchestra. I was looking for a new flute teacher and she was happy to take me on. I went onto study music at Royal Holloway and The RNCM and now work as a professional flautist in London, across the UK and abroad. An opportunity arose in 2001 for me to audition for the position of principal flute of the Coldstream Guards Band and I figured that if it was  good enough for her teacher Geoffrey Gilbert (during his National Service) then it was definitely good enough for me! I am still in that job and pursue a full career with the band as well as performing internationally, chamber music, teaching and coaching. I have always remained in contact with Michelle, speaking at least once a month and exchanging frequent letters and cards and and visits when I was in the area. I even sent her nearly every solo concert programme I’d done which she would methodically go through and comment on. She was always so supportive of me and I thought of her as my mentor, with whom I shared what I was doing and asking for advice when needed! She was so kind and interested in what I was doing.
In 2018 she very kindly told me she was leaving her beautiful Lois Lot flute to me, and wanted me to have it then. I had it restored and took to show her as a surprise with a photo of it and a detailed description of what was done, which she could keep.
I have since played Debussy’s Syrinx on it in recitals and lecture recitals. It is a beautiful instrument which I hold dearly, as well as the memories of such a lovely beautiful person who has had such an influence in my musical life for the past 30 years. She was always positive and wrote me such lovely letters.
I last saw Michelle on 26 September in Lewes where I was performing a lunchtime concert with the Hilser Trio, and I dedicated the Damase Sonata to her. I then spoke to her on Christmas Eve to wish her a Happy Christmas. I miss her so much.
– Rachel Smith