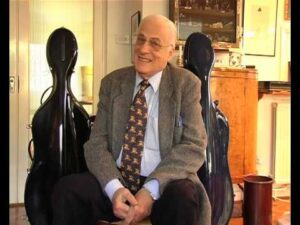 Martin Lovett, who has died aged 93, was English-born and will be remembered as the cellist of the Amadeus String Quartet. This group was formed in 1947 by Lovett and three Austrian refugees from the Nazis and for forty years (with the same personnel) they were the leading English chamber ensemble. Repertoire was, as their name suggests, largely the Viennese classics but the Amadeus tackled more modern music. I recall them playing Tippett’s 2nd Quartet in a York festival in 1954 (one of many times I heard them perform about that time) and the dying Benjamin Britten composed his 3rd Quartet for them. Lovett was educated at the Guildhall School and latterly was closely associated with the RCM.