Rameau and the Greeks 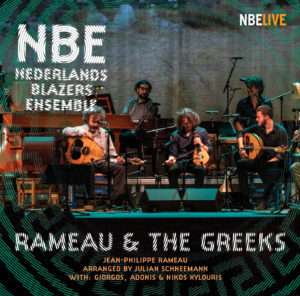 This is the second album of cultural and musical cross-fertilisation in a proposed series of three by the Nederlands Blazers Ensemble [Netherlands Wind Ensemble, or NBE for short]. The first was Bach and Sufi, a stunning set, combining excerpts from the B Minor Mass of J.S. Bach to Iranian and Sufi spiritual and folk music.

This time, we have rather more emphasis on the instrumental music, though there is some singing along the way. Rameau’s operas focused heavily on Greek and Cretan mythology, thus it was the notion of NBE artistic director Bart Schneemann to marry two of his musical interests: his love for the music of Rameau and his love of folk music found on the island of Crete.

The resulting disc is a family affair in more ways than one: the NBE are joined by a family of Cretan musicians; Giorgos, Adonis and Nikos Xylouris. Meanwhile, Julian Schneemann, the son of NBE’s artistic director, provides stunning arrangements of all of the music on the disc. The 27-28 year old musician, himself a brilliant jazz pianist and composer, travelled to Crete to work with the family, not only to make notes on the folk music for his arrangements, but to develop an entirely new musical system, which would allow the Xylouris family, who do not read western notation, to be able to read and perform his arrangements of Rameau. This is a task that I’m sure nobody reading this will underestimate.

Of course, the obvious game to play, when listening to the disc is to try and identify, without looking, the Rameau works and the Greek works and, in my conversations with Bart Schneemann, he has commented that these recordings are at their best when this line is blurred. I personally would go one step further. The question of “Is it Rameau or is it Greek?” is perhaps the wrong one to ask. Rather, the sixteen tracks on the disc constitute a whole new work, which stands on its own two feet, despite using some pre-existing materials, all of which is testimony to the brilliance of the arranger and of the musicians performing. Indeed, the philosophy of the ensemble is to dispense with terms like ‘classcal’ and ‘world’ music, or even ‘light’ and ‘heavy’ music, instead treating all musics as equally important.

The performances themselves are wonderful. In addition to their playing, the Xylouris family [Giorgos and Nikos on lauto and Adonis on lyra] also sing beautifully on a number of the folk tracks. There are no operatic voices, however in the French baroque music and the instrumentalists take the part of both orchestral players and interpreters of the vocal lines. This reaches its zenith in the arrangement of Tristes apprêts from Castor et Pollux; a lyrical island of calm both in the opera and in this programme. Here, it is Bart Schneemann’s oboe that assumes the vocal line and it is a truly beautiful performance throughout its seven minute running time. A seven and a half minute Cretan folk number follows two track later, as if to counterbalance this in an equally vivid performance on a far more upbeat note.

This is a live recording, replicating the programme as it would have been heard by the audiences when this programme was toured. Their enthusiasm is more than evident in their loud cheers and applause throughout, but audience noise is never distracting on this exceptionally well balanced recording.

The next instalment in this series from the NBE [though slightly delayed due to the coronavirus crisis] is set to have a distinctly British flavour: Purcell and the Celts and I for one will be recommending acquiring the whole collection without any hesitation! DA