Beethoven: The Ruins of Athens 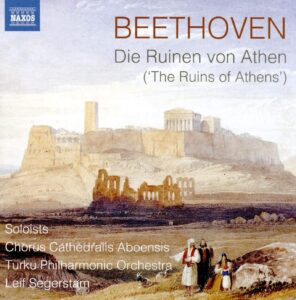 The Beethoven year will undoubtedly bring with it a superfluity of recordings of the composer’s major works, but it also provides an opportunity to revisit some of the less well known aspects of the composer’s output. Both of the works on this disc were written for the same purpose, on different occasions: the dedication of a theatre. Beethoven composed Die Ruinen von Athen in 1811 to accompany the play of the same name, which was used to be the premiere performance at a new theatre in Pest.

The action depicted is allegorical, perhaps to a logical extreme: the goddess Athene visits Athens to find it in ruins, but is led by her herald Hermes to Pest, where she enters the theatre and joins Holy Roman Emperor Francis II in consecrating the new building, a chorus pledging loyalty to Hungary.

This is music with no shortage of pomp, designed to instil a patriotic swell in the heart of the listener, but there are moments of great sensitivity and even playfulness along the way. Famously, of course, the Turkish March has found some life outside of the larger work, which is a singularly memorable example of Beethoven at his most fun.

The choir and orchestra under conductor Segerstam really shines on this recording, though we are also blessed with two fine soloists: the soprano Reeta Haavisto, who carries wonderfully over the orchestra, though does in a couple of place show signs of strain in some of the hardest vocal passages, but we are talking about some of Beethoven’s most challenging vocal writing here. Similarly challenging is the writing for bass and Juha Kotilainen is deeply impressive with some of the spectacularly low ranges that the composer calls for.

The recording represents the first time that the entire Festspiel has been recorded in its entirety complete with the narrations between the musical movements. I’m not sure what this really brings to the overall experience, but at least we can finally have a clearer impression of what the audiences at the premiere heard.

Die Ruinen von Athen was reworked for a Vienna theatre dedication some time later and some of the music was recycled. However, a new overture was written as well as some new and revised vocal music to create the piece Die Weihe des Hauses. We have four tracks from this reworking, which open the disc. The overture is a super work, which has once again found an audience as a stand alone concert work. It was reworked twice more by other composers and librettists, notably Richard Strauss and Hugo von Hoffmannsthal, the premiere of which was conducted by Alexander von Zemlinsky. The inclusion of the reworking really provides insight into both works’ historical relevance. All in all, however, it is a CD release as historical record and very enjoyable on these terms, while I would be surprised if either work reaches a concert platform in their original forms any time soon. DA