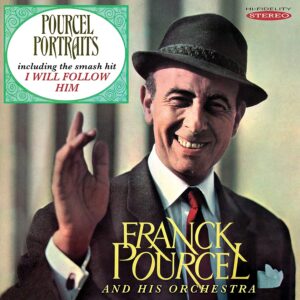 This is the real deal. I was delighted when it eventually plopped through my letter box – thank you, Postie – as the French composer, arranger and conductor, who died 20 years ago, has long been my favourite continental purveyor of our kind of music.  And by all accounts he was a perfectionist but a nice guy. The delightful photo of him on the front of the booklet is an indication of the delights on the CD.

During his 87 years he recorded over 2000 songs and made 250 albums. It is reckoned that if the sum total of his record sales were piled one on top of the other, it would be 20 times the height of the Eiffel Tower.“Hooray” to Sepia’s Richard Tay for releasing this collection of no less than 28 titles, taken from early ‘60s LPs and excellently re-mastered by Robin Cherry. Prominent is the Frenchman’s biggest instrumental hit Chariot (I Will Follow You), self-penned with Paul Mauriat, the vocal version sung in French earning our own Petula Clark a gold disc. The song is also featured at the end of the 1992 film ‘Sister Act’ where it was performed by the nuns’ chorus for the Pope with Whoopi Goldburg as the lead singer.

The 50-piece orchestra here comprises violins, violas, cello and harp supplemented by brass, wind and rhythm instruments.  I admire what in another place are described as M Pourcel’s “master technician’s trademarks… his dramatic use of high-pitched strings… and his intriguing use of rhythm”.

The imaginative arrangements, presumably by the maestro himself, are full of French flair and this album is a welcome tonic in these traumatic times. We rarely get the chance nowadays to add a new release like this to our collections, so please support Sepia by buying it direct for £7.99- postage free.