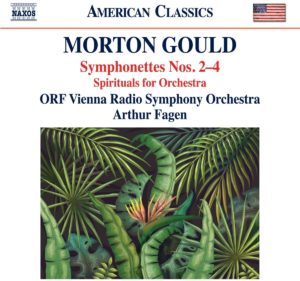 Morton Gould, as the liner notes in this latest release inform us, was something of a musical chameleon equally at home in the worlds of “serious” and “light” music. The works presented here are works of a truly American vernacular, drawing on poplar culture as well as classical forms. Even the the word “symphonette”, we are told by Gould’s biographer Peter W. Goodman, “was a clever attempt to Americanize and modernize the term ‘sinfonietta,’ linking it with such up-to-the-minute concepts as kitchenette and dinette.”.

The earliest example of this innovative form on the CD is the Second Symphonette from 1939. Both this and the Third Symphonette bear the subtitle of American Symphonette. The Second opens with a jazzy fanfare, which is developed into the central theme of the first movement- introduced first by a solo trumpet. It is an arresting and entertaining first movement, though it is the second movement of this work, the Pavanne, that has proved to be one of Gould’s most enduringly popular works as a stand alone piece and it is easy to see why. Deliberately mis-spelled to ensure American radio presenters properly pronounced it, it is a brilliant synthesis of the old dance style with popular jazz styles in the composer’s country at the time.

It is also perhaps unsurprising that individual movements of the works presented here have found a home in concerts outside of their original contexts. While there is clear thematic development in the works, each movement doesn’t function in isolation extremely effectively. This might lead some to question how well the works hang together as a cohesive whole, but with music of such sustained high quality, this will hopefully be rendered a non-issue.

The Third American Symphonette boasts a similarly arresting opening movement, perhaps even more so than of the second, though the slow movement here shows Gould in a far more experimental frame of mind. I remain unsure if I consider this movement to be wholly successful, but for sheer originality, it is probably my most played track on the disc. A real crowd pleaser here is the delightful Gavotte, in which, similar to the Pavanne, Gould takes an archaic dance form and combines it with an American jazz idiom, which I’m sure will leave the listener smiling.

The Fourth Symphonette marks a distinct departure from the musical language of the second and third, but it does not suffer for it. The Latin-American Symphonette, as the title suggests, is bursting with latino rhythms, the movements being Rhumba, Tango, Guaracha and a final Conga. The treatment of the thematic material in this work strikes me as the most sophisticated on the disc, using contrasting rhythmic ideas in different themes to create a complex and appealing musical dialogue that never allows the listener to become too comfortable in a particular style.

On the disc, these works are surprisingly included in reverse chronological order. It is rounded off by one of Gould’s most famous works: Spirituals for Orchestra, in which African-American music is at the forefront, creating a kind of symphony in all but name, despite its five movements.

It is wonderful to have this music recorded on a budget label such as Naxos. Arthur Fagan leads the ORF Vienna Radio Symphony Orchestra in insightful performances, committed equally to the serious and light sides of the Gould coin. Sometimes, Gould’s arranging work for wind ensembles and even for film and the Broadway stage has overshadowed his own compositions and it would be nice to think we are going to see more recordings that redress this imbalance at some point- and if the performances and recordings are of the quality here, there will be a collection to acquire without hesitation! DA