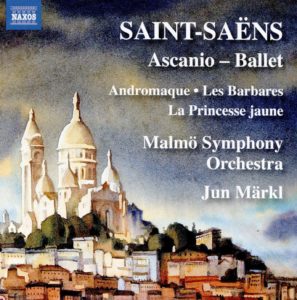 Camille Saint-Saëns (1835-1921) – born in Paris: a composer, organist, conductor and pianist – is best known for his Carnival of the Animals (particularly ‘The Swan’), Danse Macabre and Third ‘Organ’ Symphony, but he wrote a lot more besides.  In 1908 he was the first to supply an orchestral score to accompany a silent film.

This, together with what has been described as his seemingly inexhaustible melodic imagination, means that he should be of interest to light music enthusiasts.  It is borne out by this release on the ever-reliable budget-priced label.

There are 19 tracks, with 11 of them containing a tad under 24½ minutes of ballet music from Act 3 of the poorly received and now rarely if ever performed grand opera ‘Ascanti’ A pair of alternative versions of numbers from the work complete the disc.

Other enjoyable items include the Overtures to the Spanish laced ‘La Jota Aragonese’ and ‘La Princesse Jaune’, a composition from back in the day when in Paris things Japanese were all the rage.  Another attractive piece is Ouverture d’un opéra-comique (Overture to an unfinished comic opera), which in 1913 had remained unplayed for nearly 60 years.

The combination of the German conductor Jun Markl with the Malmö Symphony Orchestra from Sweden, recorded at the city’s Live Concert Hall, never disappoint when it comes to French-style music; the uncredited flautist being the star performer throughout.  It does sound as they all had a good time making the album.

M Saint-Saëns spirited and appealing instrumental  compositions for operas do not deserve to be disregarded.  This splendid album – available for the price of not more than four cups of coffee – will bring lasting pleasure to the listener.