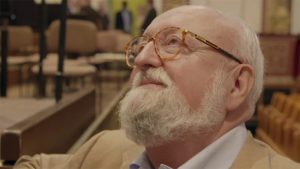 The Polish composer Penderecki has died, ages 86. He was a composer and conductor, the latter mainly, of his own works.

His compositions were often connected with avant-garde though not always. After some of his most confrontational works, which helped launch his career, (such as The Awakening of Jacob and Threnody to the Victims of Hiroshima), his style developed later in a neo-romantic style.

Of his eight symphonies, the Second (Christmas) has been described as “almost Brucknerian”. His St. Luke Passion, conducted by him at the Proms, was also approachable, being based partly on medieval material. He taught at Krakow Academy; London’s Royal Academy of Music held  festival of his music in 1986.

Some of his music achieved fame thanks to being included in numerous films, including those by Stanley Kubrick, David Lynch and, very famously, The Exorcist.