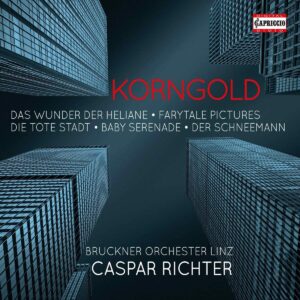 Korngold seems, more often than not, to be relegated to the realms of unimportant, yet interesting composers for whom there is something of a cult following. Naturally, we are talking about a very major composer in the history of music for the screen, but some have tended toward the view that this was a waste of a considerable talent, not least the composer’s own father.

Thankfully, there are now multiple recordings intended to redress this view, showcasing both his prowess as an orchestrator and as a musical storyteller in his operas. This generous box set collates a number of recordings released by the Bruckner Orchester, Linz under the baton of Caspar Richter, offering an overview of the composer’s orchestral oeuvre. All of this makes a pretty convincing case for a composer whose reputation seemingly to suffer rather more than it deserves.

Here, we have a number of orchestral poems, such as the grandiose Sursum Corda, his heartfelt single-movement Cello Concerto and a number of song cycles and pieces of theatrical and film music, providing insight into the composer’s heavier and lighter works.

Straddling these two worlds of Korngold’s music are the song cycles Einfache Lieder, which translates as Simple Songs. These are richly orchestrated for very large forces and solo voice, whilst they do not show the complex polyphonic textures that Korngold’s stage works do. Also in the Lieder repertoire offered are the Abschiedlider, or Songs of Farewell. Unsurprisingly, the music in these works is far more melancholy, though never morbid, despite some aspects of the texts. Written in the darkest hours of World War One, these songs are more complex, but maintain an emotional directness, which is hard to ignore. The liner notes by Jens F. Laurson rave that this cycle ranks among the works of Strauss, Mahler and Zemlinsky. I’m not entirely persuaded of this, but I do think it is a very fine song cycle nonetheless. Mezzo soprano Gigi Mitchell-Velasco is absolutely stunning in both of these cycles, as well as the stand alone songs for piano. This is music that demands very fine performances, regardless of what you think of the music itself, and I must say I find it hard to fault any of the vocal performances on any of these discs.

We have a number of excerpts from Korngold’s operas on offer, featured on the same disc as the Cello Concerto and, while the excerpts do evoke memories of the operas for me as someone who has listened to a number of them, I do question the advisability of simply playing excerpts out of context. I can’t help feeling that well arranged suites would make a better case for this music in the abstract than mere excerpts do. That said, that particular disc does still have a lot to recommend it, not least the cello concerto. Watch out again for the singers: Karen Robertson and Wendy Nielsen, the latter of whom delivers a brilliant Ich ging zu ihm, the startling aria in the second act of Das Wunder der Heliane.

The suites from Much Ado About Nothing was Korngold’s first score for Max Reinhardt and features some of the composer’s most charming light music. Featured alongside this suite is the Baby Serenade, a light music response to the birth of one of the composer’s children. This style, which it seems he himself referred to as “jazz-light” features a slightly smaller orchestra than some of his works, but also includes parts for banjo and three saxophones. It is, in fact, some of the most inventive music in the collection, despite not being as well remembered as some of Korngold’s other works.

Along with a Fairy-Tale suite on the first disc, we also have some of Korngold’s sumptuous orchestrations of Johann Strauss II’s music. Korngold famously reworked Eine Nacht in Venedig, which has recently been released on a recording by CPO, but here, we have a couple of suites offering more hefty orchestrations of Strauss’ works than we may be used to from the master of lighter Viennise music.

I fear Korngold’s reputation may continue to fall between two stools as far as the critics are concerned and I must confess I frequently find myself torn between the camps of recognising the brilliance of much of his music, whilst also feeling a need to state just how ridiculous some of it can feel in the wrong hands. There are no half measures in Korngold’s works, leading some to find the sheer aural assault provided by some of his pieces unpleasantly decadent. Thankfully, Richter keeps a lid on most of the more over-the-top aspects of the music, still allowing the emotional content to be fully communicated. A recommended set for anyone interested in getting to grips with a genuinely multi-faceted composer. DA