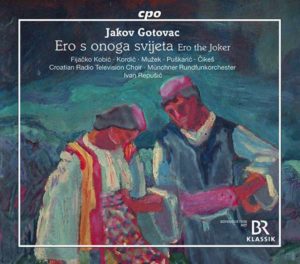 A few issues back, I drew attention to this Croatian operatic delight in our magazine’s Opera Corner. At that time, there was only one recording of the work available, other than a livestream from OperaVision, which, whilst well performed, did show signs of age. It was apparently taken from a magnetic tape and occasional “ghosting” was audible in the quieter moments. What a nice surprise it was, therefore, to read of this new release on the CPO label in a new digital recording.

There isn’t a lot about the score itself that I can say that wouldn’t duplicate the article in the magazine, so please do seek that out, if you wish to read a little background information. The package itself is very generous, with a double CD of the complete work and a hefty booklet featuring a full libretto in the original Creation with German and English translations. There is also a highly informative article written by Florian Heurich providing superb insight to this opera and its place in Croatian musical history.

Gotovac’s score requires an orchestra of considerable size for his energetic and engaging score. Here, the Münchner Rundfunkorchester are the only evident non-Croatian musicians featured on the recording and it is a terrific job they do. There is much purely orchestral music in the opera, some of which has proved popular in concert halls and, when played this well, it is very easy to see why. Conductor Ivan Repusic interprets the work’s vibrancy with great aplomb, never allowing the voices to be overpowered by the considerable instrumental forces.

The singers on this recording are among the best you’ll hear interpreting this opera. Valentina Fijacko Kobic supplies us with the empathetic heart of the story in her role of Jula, the young daughter of landowner Marko who falls for the charms of the titular mythical figure Ero, who is later revealed to be anything but a supernatural entity. In the role of Ero we have the tenor Tomislav Muzek, who inhabits the role of the playful figure perfectly, whilst never giving into the temptation to over-caricature his performance. Another real highlight, having been so impressed by his performance in OperaVision’s live stream, I was thrilled to discover baritone Ljubomir Puskaric reprising his role as Sima the miller on this recording: a genuine name to watch out for as  not only a fine singer, but also an engaging actor for the operatic stage.

As a Croatian national opera, it may of course be said that its appeal may differ outside of its homeland, but I believe there is enough here to recommend this as a fine comic and light opera with universal appeal and hugely entertaining music. DA