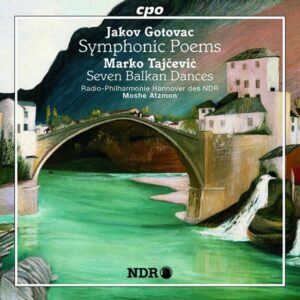 This appears to be a re-release of Gotovac’s orchestral works to coincide with the new release of the opera Ero s’ onoga Svijeta, showcasing more of Croatia’s musical variety.

The selection of Gotovac’s other symphonic poems is well worth your time if you enjoyed Ero. The orchestra is frequently given time to shine in the context of the opera, but on this disc we have an opportunity to hear the most popular music from the opera set as a symphonic poem [the fourth track on the disc]. The Song and Kolo from Ero is a genuinely entertaining piece of music, which deservingly ranks among the most popular of the composer’s works and it would be great to see it performed outside of the composer’s native land a little more frequently.

Sadly, Gotovac’s critical reputation outside of Croatia is that of a “one hit wonder” and his works have largely suffered the same fate as so many perfectly fine works in the field of Light Music, namely: being written off as slight works with little or no attention paid to their merits. The music we can find on this recording is all approachable and instantly appealing, whilst being well orchestrated, melodically memorable and, in places, presenting the musician performers with their fair share of challenges.

The excerpt from Ero is, of course, a good place to start: we here the song of Ero played beautifully on the French horn, before we are plunged into the fun of the Kolo [A Croatian national “Round Dance”, usually performed in traditional national dress]. This particular recording of the dance speeds to astonishingly fast tempi by the end of the performance, in fact I don’t think I’ve ever heard it performed faster. There are, however, a couple of glaring mistakes on the part of the recording engineers: after a tam-tam is struck toward the end of the piece, the volume of the whole recording inexplicably begins to fade in and out- a flaw that really should have been ironed out before release. It does not, however, detract from the piece’s entertainment value.

Another Symphonic Kolo opens this disc; in this instance, very much more an orchestral poem than a dance work and no poorer for it. Granted, it’s main melody is perhaps not as memorable as the operatic one, but this is Gotovac exploring an orchestral canvas of national music with a recognisable flair for colour and timbral variety. In my Opera Corner on Ero, I likened Gotovac’s score to Croatian “naive” painting and this purely orchestral work seems to illustrate this link better even than the opera, conjuring up mental images of peasants dancing after working hard on the land.

By far the most beautiful work on the disc is a Song and Dance from the Balkans, which is scored only for string orchestra. The opening begins with a mournful introduction, before relaxing into a sunnier E major. The song, however, continues in a somewhat melancholy manner, at times reaching a level of emotional intensity greater than anywhere else on this disc. The song is eventually overtaken by a far more upbeat dance, featuring some virtuosic passages for the players before racing towards a thrilling and uplifting conclusion.

It seems a shame to me that the Tajčević dances seem relegated to a position of “filler” on this disc, as they seem to hint at a composer well worth investigating more fully, if only a few more recordings existed of his works. Nonetheless, we have a worthy companion to Gotovac in his Balkan Dances, which round off this endearingly approachable collection of music with panache.

The playing from the Radiophilharmonie Hannover is absolutely first rate and I particularly enjoyed the opportunity to hear their string section in isolation in one track, where they really do shine. Thanks to Moshe Atzmon and CPO for helping bring Croatia’s music to a wider audience and here’s hoping it continues.

As a postscript, CPO have also released fascinating CDs of Croatian composers including works by Dora Pejacevic and Boris Papandopoulo, both of which are really worth investigating if you get chance. DA