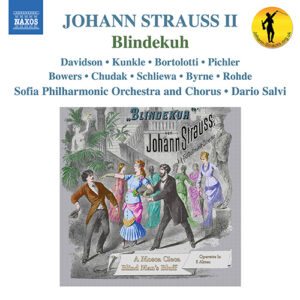 Canonically speaking, Blindekuh (Blind Man’s Buff) came four years after Strauss’ runaway hit Die Fledermaus, but it was in no way as successful as its predecessor, closing after only 16 performances. Audiences of the day cited an extremely convoluted libretto, but the music was praised very highly.

The overture is brilliant: a sustained and supremely skilful development of thematic materials used in the main body of the operetta. All of the subsequent music in the operetta is of an extremely high quality, clearly the work of a composer not afraid to experiment. Barely any of the music is in common time and alongside the customary waltzes, much of the music seems to alternate between 6/8 and 2/4. In addition to this, Strauss is clearly experimenting with ways to blend the dialogue more seamlessly with the music. This is evident at the end of track two on the first disc, which lacks any conventional cadence in order to simply let the orchestra die away and allow the dialogue to take over.

Musically, Strauss handles the complexities of the libretto with incredible dexterity, ensuring that the story never gets lost in the midst of the many plot strands. In the act one finale, all of the major musical themes are covered, as you would expect, while equal time is given to highlighting each of the characters’ states of mind.

The second act is an operatic gem, weaving all the strands of story together both musically and dramatically. My hat goes off to tenor Daniel Schliewa, who navigates a fiendishly difficult passage in one of his arias (a passage involving staccato high-Cs is repeated no less than EIGHT times!), using impressively controlled falsetto. Andrea Chudak is a perfectly suited to the role of Betsy, capturing the character’s annoyance at her circumstances, and rather anarchic sense of humour, perfectly. Her second act couplet is a wonderfully characterful piece into which Chudak pours all of these aspects. The second act culminates in an intricate finale of choruses, solos and dances, similar to the first act, in which the irresistible Blindekuh Waltz takes centre stage.

I have highlighted two performances, but this is undeniably an ensemble piece and fortunately, the ensemble cast here plays wonderfully off one another.

As a recording and a package, however, it has its problems. There is a tendency to keep the package as low budget as possible, resulting in the removal of librettos and a lot of potential writing about the operetta in question. Naxos has been generous in posting the libretto and some information online, but I’d still personally be prepared to pay a little more for a booklet with full libretto. In terms of the recording itself, the audio quality is far superior to the acoustic on the Auber overtures recording from Salvi, but there are sometimes balancing issues: occasionally the orchestra overwhelms the soloists, and I found the chorus’ words difficult to discern in places.

Fortunately, these issues are brief and ultimately it is the musicians who have the last laugh. I would like to see Salvi and his teams better served by Naxos recording setups, however, as I was lucky enough to see part of a concert performance of this work on video and know full well what this same piece sounded like under different recording circumstances- a marked difference. As was the case with the Auber overtures, however, the important thing is that this recording exists at all and all involved make a really convincing case for an overlooked one-time flop. The recording leaves me thoroughly persuaded that a skilled director could stage this in a way that makes me even more bewildered as to why this was an initial flop than I am now. Bravi a tutti! DA

A wonderful excerpt from the opera can be found below to whet your appetite. Enjoy!