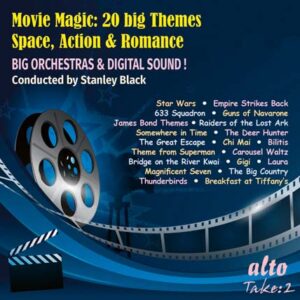 There was a time when Stanley Black’s name would be synonymous with BBC Radio 2’s Friday Night Is Music Night (it might even have been during the light Programme era – for those of you who remember it). He would also be a prolific visitor to recording studios with “his orchestra”. Previously he had conducted the BBC Dance Orchestra, and became a familiar name in the business of film music.

A keen advocate of broadening out the appeal of lighter classical music, his programmes were eclectic and his conducting career flourished. It also meant a devoted fan base of folk who would go to Golders Green, North London to hear and see him conduct the BBC Concert Orchestra.

Stanley Black died in 2002, aged 89 and has left a legacy of well-recorded tracks, many of which come together in this recent release from Alto Records. Twenty film scores are featured including some that get less frequent exposure such as Francis Lai’s music for Biltis and Barry Gray’s march for Thunderbirds. But what struck me about this compilation was the clarity and impact of the recordings although no details are given on the sleeve liner as to dates and location. From the opening bars of Star Wars to the closing John Williams track, the orchestra deserves praise for the incisiveness of the strings.

As a postscript I have quite a few Stanley Black film scores in my library but have never felt compelled to include them in some of the programmes which my music group produces. I must rectify that.